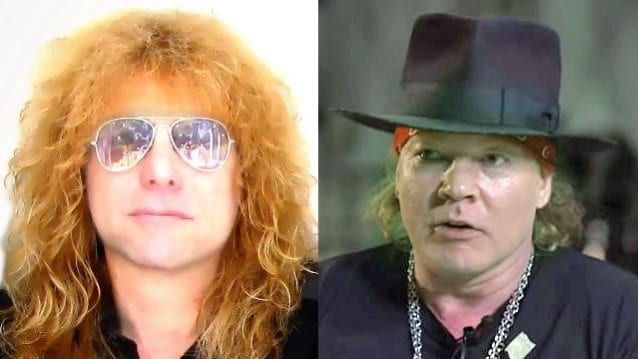 Earlier this week, former GUNS N’ ROSES drummer Steven Adler was interviewed on “Trunk Nation”, Eddie Trunk’s show on SiriusXM channel Volume (106).
On what it was like seeing Axl Rose for the first time after he came down to play with GUNS N’ ROSES in Cincinnati last July:
Adler: “I only talked to Axl for literally ten seconds. The first night I played with them in Cincinnati, I got a fistbump and a little smile, and that was good enough for me. And then at Dodger Stadium [in Los Angeles], I got to give him a little hug and shake his hand and say I love him and he fucking rules and ‘thank you so much for giving me this opportunity. I had the greatest time.’ And he walked on his way. And I went on with my life. And I’ve been enjoying it ever since. He’s Axl. He does his show and he gets so passionate and such emotion that he really just needs to relax and come down for at least an hour, ’cause he is a monster on stage. And he puts out so much feeling that he becomes those songs. And he’s been fabulous at it. And Slash and Duff are so much fun. When we’re together at soundheck, the crew was all, ‘Jesus Christ! You’ve gotta come down more, ’cause the only time these guys ever smile or have fun is when you’re here.’ And I was saying, ‘I would love to.’ But it is what it is.”