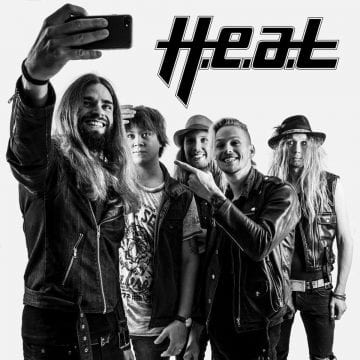 Swedish melodic rockers H.E.A.T will be releasing a ‘best of’ compilation album via their Japanese label on December 19, 2018. CD Japan indicates that this is a Japan only release and there will be “completely unreleased track(s) on a bonus disc.”
Melodic Rock provides the following translation in part of the text from CD Japan from Japanese to English:
“Being the driving force for Swedish melodic rock scenes to prosper and now, the first best album of ‘HEAT‘, which grew into Sweden’s leading rock band. Under the cooperation of labels and bands, the best album that belonged to multiple record companies and was difficult to produce was realized as Japan’s original planning board. In addition to the main part of the selection from all the albums from the debut album “HEAT” to the latest work “INTO THE GREAT UNKNOWN“, rare tracks including completely unreleased songs / sound sources, first CD-incorporated sound sources were recorded Two pairs of fan drooling with a bonus disc.
● Completely Japanese original project, so recorded mainly the songs that favored the taste of Japanese fans.
● Booklets will be posting things with material value that you can look back on the history of the band so far.”
Melodic Rock posted the following about the songs that will be on the ‘best of’ compilation album:
Disc 1 (Song order not decided):
There For You
Late Night Lady
Straight To Your Heart
1000 Miles
Beg Beg Beg
We’re Gonna Make It To The End
Breaking The Silence
Living On The Run
Falling Down
In And Out Of Trouble
Point Of No Return
A Shot At Redemption
Inferno
Tearing Down The Walls
Time On Our Side
Best Of The Broken
Eye Of The Storm
Blind Leads The Blind
Disc 2 (Tentative songs to be included):
Drink Alone (First CD)
Tearing Down The Walls (live version)
Living On The Run (radio edit) (first CD conversion)
Smile For The Camera (unreleased piece)
We’re Gonna Make It To The End (acoustic) (unreleased version)
In And Out Of Love (demo) (unreleased version)
Redefined (acoustic) (unreleased version)
Point Of No Return (acoustic) (unreleased version)