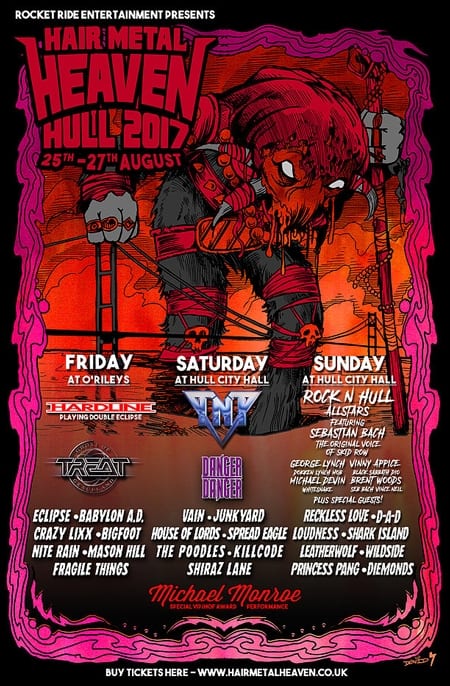 Second day of Hair Metal Heaven and this time in a different venue. To be more specific the festival took place in the huge and classy Hull City Hall. I think that was the most beautiful place I’ve ever watched a live show after Chania Rock Festival! The City Hall lays in the center of town on the big round square near the river of Hull. The fact that the day was so sunny made everything more magical. The square was full of glam metal fans since 13.00 in the noon and they seemed really impatient to join the show.

The festival started with Black Cat Bones (not the 60’s rock band also originating from UK…), who were added in the lineup at the last minute since House Of Lords cancelled their appearance a few days back due to unknown reasons. The sound was really loud in the beginning and the venue wasn’t packed at the time so it was really hard for me to understand if the band sounded any good. Their moves and their style though was a copy of GnR. Especially the singer tried really hard to look and move like Axl Rose used to. Of course no reason for further comparisons. 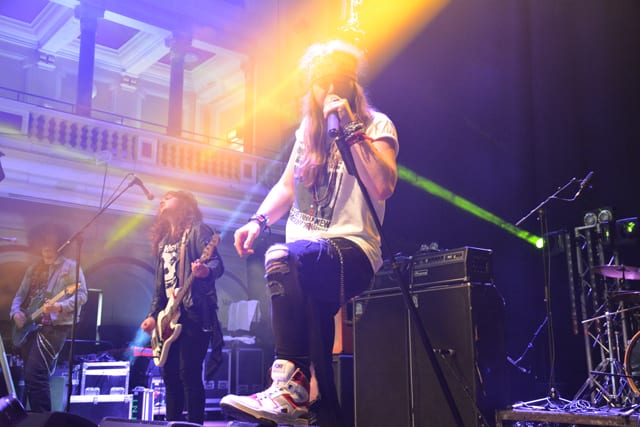 The first band of the day on my “to watch” list was the Finnish Shiraz Lane. I became a fan when I first listened to their amazing album For Crying Out Loud. As expected, Shiraz Lane sounded exactly like the album. Hannes Kett has an amazing high pitched voice and he is a great performer too. He is definitely one of the best heavy metal singers of his time although he is really young. The band has a visual consistency among members and their professionalism brought many more fans to their camp. You have to look for them if you haven’t already done so!

Wake Up, Momma’s Boy, Begging for Mercy, For Crying Out Loud, Mental Slavery, Out there Somewhere 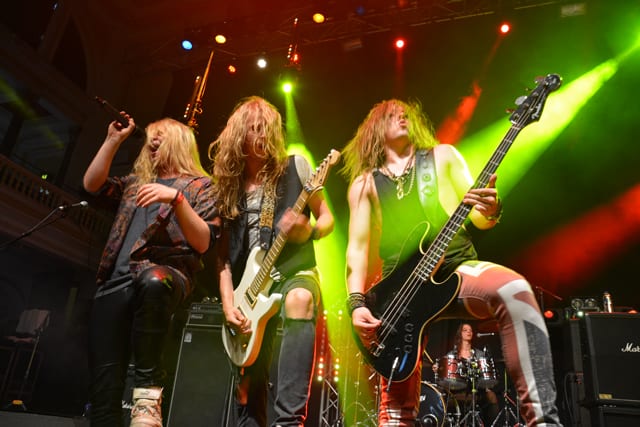 One more band that I didn’t really know before the festival, was Killcode who followed with a much more grunge-stoner music style. You can tell that Killcode is a band consisted of hard workers with their own musical personality but not really up my alley. I couldn’t find songs to connect with. But their show was definitely fulfilling for their fans. There were many people who liked what they saw so I guess if you are in this kind of music you should give them a chance. 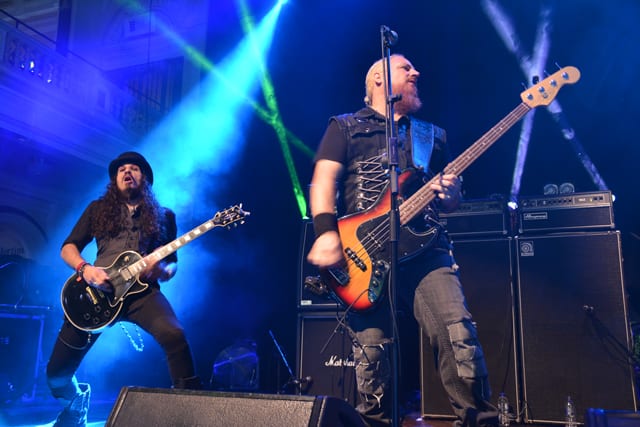 17.00 was party time as the well know Swedish band The Poodles hit the stage. One of my favorites from the day I first listened to the debut album. The truth is that I was so excited for seeing them since Firefest of 2009 in Nottingham. But this was definitely their best performance. Jacob Samuel has improved a lot, being an outstanding performer with a great voice. Although they’ve changed a member, The Poodles seem to be really linked with one another. I expected a much more enriched setlist, but the time pressure unfortunately made them skip “Caroline” which is a really good hit. Their new cover song Love Is Gone blew us away. It was a really amazing choice and its gonna be a radio hit in Sweden for sure.

Before I Die, House Of Cards, Metal Will Stand Tall, Cuts Like A Knife, Shut Up, Love Is Gone, Like No Tomorrow, 7 Seas, Night Of Passion 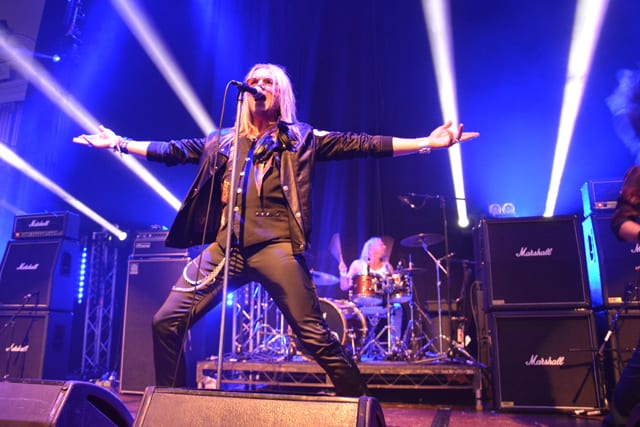 The next band was the talk of the festival. I had never had any special connection with Spread Eagle but it seemed like many people were there especially for them. Sadly, the sound started messing with our ears again and it was mostly bustle than music, so I never really got what they were playing. I think it would be best not to share more about them since I didn’t really get what was going on … 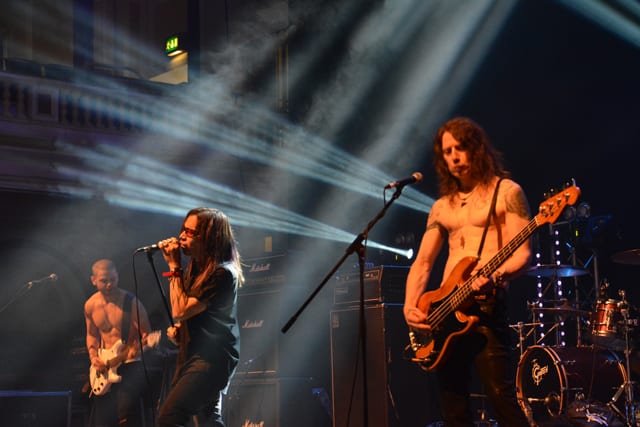 One more important performance was that of Junkyard, finally playing live in Europe. With a new album under their belts they decided that it was about time to cross the borders… Junkyard is one of those bands who witnessed the peak of the good times in LA and as I could clearly see, people haven’t forgotten them. With more of a punk music style and outfits, Junkyard almost destroyed the stage with a powerful show in a half empty venue and with a mediocre sound. Of course they didn’t skip playing their debut album hits sending us all back in 1989 when bands like them were still on top.

Life Sentence, Back On The Streets, Out From The Same Cloth, All The Time In The World, Misery Loves Company, Faded, Simple Man, Blooze, W.F.L.W.F. Hands Off, Hollywood 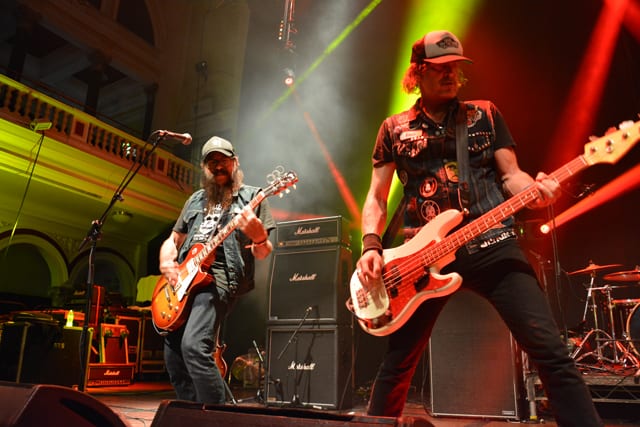 Τhe main reason I was so attracted to this festival was the announcement of the band Vain. A band that I know and love since I was seventeen years old. No Respect in one of the most important sleaze albums of the 80s and one of my top favorites. The unique style and voice of Davy Vain separates them from most of the other bands of the hard rock-sleaze scene. I never thought that I would witness a live show like this one. They went far beyond every expectation. Davy’s voice, moves and his idea to come out on stage shoeless made his whole performance special. He was crawling, running and doing all kinds of stuff on stage without losing a single note. Apart from Davy Vain, the show included some nice surprises such as the first guitarist of Vain, Jamie Scott who looks like he is still in his 30s…Noteworthy was the fact that Vain attended both days of the festival among the fans and didn’t miss the chance to meet many of their own. The same happened with Killcode, Treat, The Poodles and Babylon A.D.. I have the utmost respect for the musicians who love to spend time with their fans. If it wasn’t for the fans, all those bands wouldn’t mean a thing… Vain’s setlist was unreal. The show started with the song Secrets and I felt like seventeen all over again. Jumping and singing through the whole set. That was definitely the second best appearance of the 2nd day with only one complain. That they didn’t play Who’s Watching You, although it was supposed to be in the setlist. I hope that I will see them again live soon! 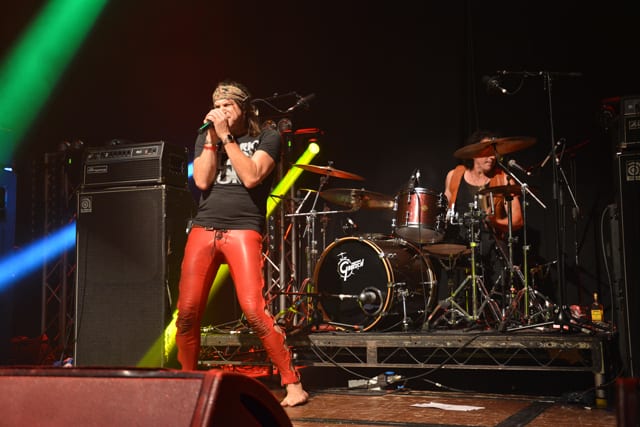 The time had arrived for Danger Danger. Ted Poley was more than friendly and in a strong bond with his fans. He sang some of the best songs of D.D. with the highlight moment being I Still Thing About You, which came out of his mouth flawlessly. He has a really strong melodic voice and I think that he doesn’t really need a mic on stage. Rob Marcello might be missing from the line up but he was replaced by the great Steve Brown of the band Trixter. It’s impossible to fail when you have musicians such as Bruno Ravel, Steve West and Ted Poley.

Boys Will Be Boys, Crazy Nites, Under The Gun, Don’t Blame It On Love, Hearts On The Highway, I Still Think About You, Beat The Bullet, Monkey Business, Bang Bang, Naughty Naughty 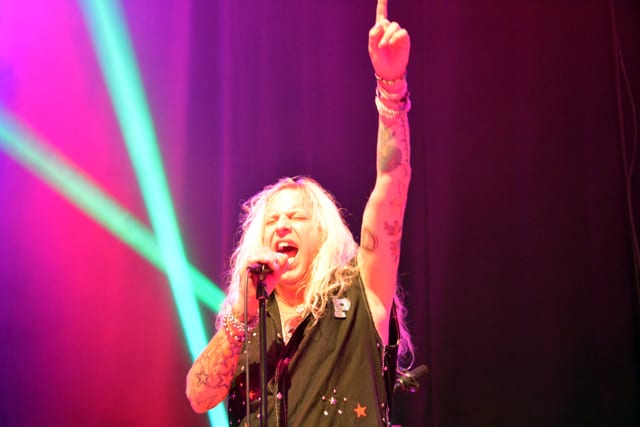 Headliner of this special day was TNT. Everyone expected the magic moment that Tony’s incredible voice would fill the venue. The festival was way beyond schedule and when the time arrived for Tony Harnell to go on stage, most of the crowd left for the VIP show of Michael Monroe which was held in another venue. His voice was really strong and the small number of people left in the venue were watching in awe. The speakers were useless. You could listen to Harnell from miles away. The sound engineer though made it hard for me to enjoy the show since I felt like I was going deaf. The setlist fulfilled my expectations and I finally got the chance to listen to live some great songs such as  “Tonight I’m Falling”, “Everyone’s a Star”, “Seven Seas” and “10,000 Lovers (In One)”.

Invisible Noise, As Far As The Eye Can See, She Needs Me, Desperate Night, Child’s Play, Tonight I Am Falling, Forever Shine On, Northern Lights, Downhill Racer, Seven Seas, Listen To Your Heart,10000 Lovers, Everyone’s A Star 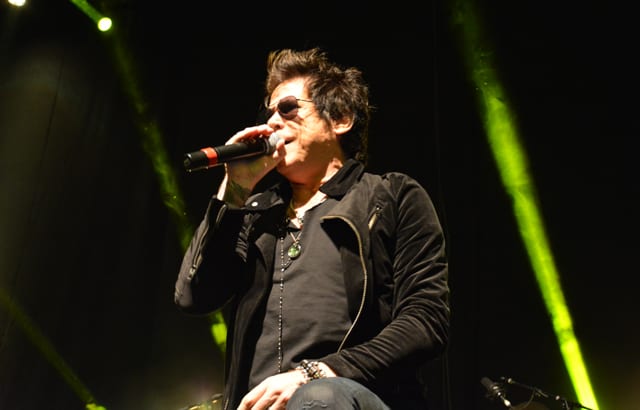 Unfortunately, due to a misunderstanding with the manager of Michael Monroe, the show was cancelled and all those people who left during TNT, were really dissatisfied the next day…