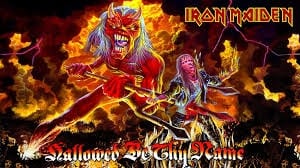 IRON MAIDEN has settled a lawsuit over the writing credits for the band’s classic song “Hallowed Be Thy Name”.
In court documents, Harris’s lawyers admitted he saw BECKETT perform in 1973 and said that BECKETT’s debut was one of his favorite albums when it was first released. Although McKay has said that Harris and Murray have been ordered to pay £900,000 (approximately $1.25 million) in costs and damages, a spokesperson for IRON MAIDEN told BLABBERMOUTH.NET that the actual figure was much lower. “We do not believe that Brian Quinn was the one who wrote these six lines in question over 40 years ago as was claimed by Barry McKay,” the MAIDEN spokesperson said. “However, due to escalating legal fees and the potential huge costs of a court case, it was pragmatic to reluctantly settle this action with McKay for £100,000 [approximately $139,000], a fraction of what he brought the action for. A serial litigant like Mr. McKay would have foreseen this.”
MAIDEN last year dropped “Hallowed Be Thy Name” from its setlist after the band became embroiled in the legal dispute. The settlement means that the group can now resume performing the song during its live shows.