Just a few days before Hammerfall returns to Greece after a long 18-year gap, we track down the band’s founding member and guitarist, Oscar Dronjak who was more than happy and polite to answer to our questions. As you will notice, Oscar was very sincere and his answers were really interesting while his recollection of the famous first Hammerfall tour with Gamma Ray is still intact and crystal clear! Naturally, we couldn’t help but asking him about Hammerfall’s upcoming show in Greece while I must say that his point of view regarding “Infected” is well-rounded and justified. Read all the details below… Interview: Sakis Nikas

Rockpages.gr:  Oscar, it’s been such a long time but Hammerfall returns to Greece after 18 whole years! How do you feel about it? 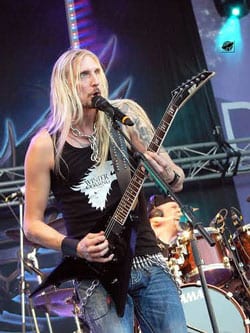 Oscar Dronjak: It’s a great feeling! I mean, it took us a long time but we will play once again in Greece and this time we will be the headliners as the first time we were the support band.

Rockpages.gr:  I remember quite well the first time that you here. You were supporting Gamma Ray and during their concert you were standing right beside me and you couldn’t believe that Kai Hansen jumped from the side balcony of the venue into the crowd. Do you remember that?

Oscar Dronjak: Of course I remember it! I thought he was fucking crazy (laughs)! I don’t think that he would that again now but those were the last shows of a very long tour and Kai was having too much fun…obviously (laughs). We were really young back then and we didn’t know a lot of things about the music business. This was my first time in Greece and I didn’t know what reception we would get. The reaction of the fans blew us away! I know that time has passed and 18 years is a long period of time…maybe, you forget a lot of things on the way but I distinctly remember how great everything was! The audience was unbelievably enthusiastic and hopefully it will be the same this time around. As far as I remember we did one show in Thessaloniki and two shows in Athens. I think the venue was called “Rodon Club” or something…

Oscar Dronjak: I see…of course, I don’t have anything to compare it with but I remember it was a very cool place for metal shows.

Rockpages.gr: You are right. “Rodon Club” was one of the best live clubs ever.

Oscar Dronjak: How about the place where we are playing now…? 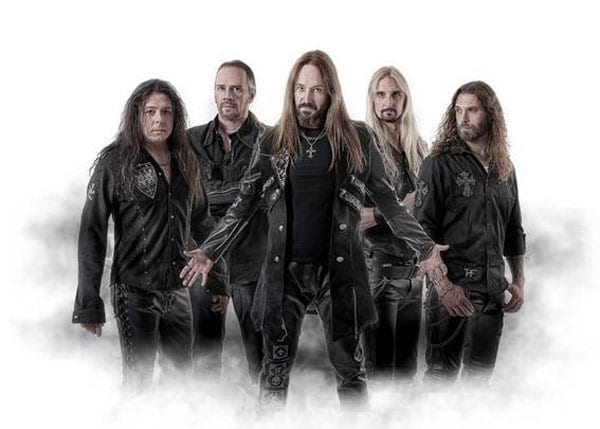 Rockpages.gr: Why do you think it took so many years for Hammerfall to come back to Greece? 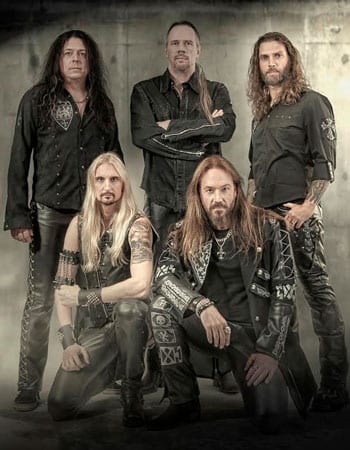 but our booking agency didn’t feel that the offers were good in order for Hammerfall to return to Greece. They couldn’t find the right people…also, I remember that there was this festival where the promoter took off with all the money…do you know about it?

Rockpages.gr: Unfortunately, I remember it well and it is not our proudest moment. It was a festival right beside the sea and there were some funny and embarrassing incidents with bands like Anthrax, Dimmu Borgir, Motorhead etc.

Oscar Dronjak: Well, these things made it hard for us to find someone in Greece that we can trust and work with. Also, Greece is a very inconvenient place to play as you have to fly down…you can travel by bus but it’s not that easy and it takes a long time as it is far south in Europe. I must say though that it is only in the last 10 years or so that we started playing in countries like Serbia, Bulgaria…but everything happens for a reason and Hammerfall returns to Greece and I believe that it will be better because we really want to play for our Greek fans! Can’t wait for it! The show now is far better than the one that we did in 1997. The band as a unity is a lot better than the line up of that first album. I can safely say that it would be a great show…you won’t be disappointed!

Rockpages.gr:  It’s been almost a year since “(r)Evolution”. Let me tell you that I was relieved to see Hector back on the front cover…we missed him on “Infected”. How do you feel about the album…are you happy with it?

Oscar Dronjak: Yeah! I am really satisfied of how it turned out. When we start working on a new Hammerfall record we don’t know how it will evolve. When we were working on this album we had a really good and positive feeling throughout the writing process. We had some obstacles to overcome but the overall writing process went down quickly compared to our previous records. Generally speaking, it was an easy and quick writing process, for me personally. Due to that fact, I didn’t know how it will turn out but I am really happy about “(r)Evolution”…it’s one of the best albums we ever done!

Rockpages.gr: I love the old school approach of the new album…

Oscar Dronjak: Exactly! It’s a powerful record and it has a lot of energy…it is something that we always try to recreate and capture since our very first album. We came pretty close in recapture the magic and not just the sound but a lot has to do with the proper attitude that we had during the writing and recording process. The hunger that we had in our first album was evident also in this record and I believe the fans show it…that’s why they like the album so much.

Rockpages.gr: Speaking of that first album…Hammerfall debuted in the music scene with “Glory To The Brave”. How do you follow such an outstanding album?

Oscar Dronjak: With “Legacy of Kings” (laughs)! When we recorded “Glory To The Brave” we had no plans of becoming a famous heavy metal band. We did that album for us…only for us and we didn’t have any expectations whatsoever. We recorded that album in December 1996 and the musical climate back then was vastly different to how it is now. We only wanted to record the best album that we could at that time and we didn’t have any plans for the future. When the album became so successful we couldn’t believe it…we couldn’t believe that people wanted a second album from us. We were so excited that we kept on writing in the same way as we did with “Glory To The Brave”. I grew up listening to all those classic heavy metal bands…I lived Heavy Metal! So, it was really easy to create another album after “Glory To The Brave”…I know that the first album will always be special because it’s the first album actually…but I believe that we had improved with every album that we’ve done since then. Hopefully the next album will also be an improvement compared to all that we had done before. 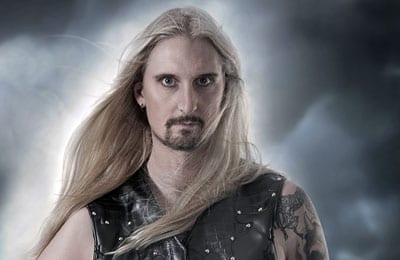 Rockpages.gr: Should we expect a new album anytime soon…?

Oscar Dronjak: Not soon but we are aiming for next year. We will see…for the first time in 18 years, we don’t have a record deal because our contract with Nuclear Blast has expired. We are currently in negotiations with Nuclear Blast but we are also looking out for other options so as to secure the best deal for our career. But the plan is to release the next album in 2016 but I don’t know exactly when.

Rockpages.gr: Hammerfall was never afraid of taking chances and experiment with their sound. You first did that with “Renegade” with a more commercial approach and you did a complete turn with “Infected” in 2011. Is it an artistic need for you and by the way aren’t you concerned about the media an fan negative feedback?

Oscar Dronjak: The thing is that with those two albums and especially “Infected” it had to happen. That’s how we felt at that time…for better or for worse. As you said, it’s creative. If you think too much about how the songs will end up on the record then quite probably the record will suck. We just write and record what fits with our personality at the time. Speaking of “Infected”, I think or even better I know that this album had some elements that probably sounded stranger to the average Hammerfall fan. But if you look at the songs as a whole or the songwriting style for that matter, it’s really the same…it’s Hammerfall! I am so proud of some of the songs on “Infected” and if you listen to the songs and how they fit into the set list, it’s not that different. Those songs go really well with the older stuff and all I am saying is that everybody should give “Infected” a try…they won’t be disappointed. In this time and age with all those media outlets…twitter, facebook…you name it…everybody has an attitude of fucking hate everything and not just simply dislike it! There’s no control to all this negativity and people think that their opinion is the right one…it’s so sad. I don’t take it so hard but sometimes when you are felling proud of something and people don’t give a damn about it, that makes me a little bit angry…thoughts like “why am I dedicating so much time on a record when people will instantly go over the internet and say the nastiest things about it?” and stuff like that. Of course, you don’t have to like everything that we do and one is entitled to his opinion but what disappoints me is the way that some people express themselves on the social media. That’s really annoying sometimes. They don’t seem to realize that there is somebody else on the other side of that criticism, of that negativity…someone who has invested years, money, blood and seat on trying to make the best album. Some people hated “Infected” without even listening to the album! They hated the album just by looking at the cover. Having said all that, it doesn’t really matter. “Infected” was a great album and if people don’t like that album then they probably don’t like what Hammerfall does in general. That’s basically what it is.

Rockpages.gr:  What can you tell us about the show in December…should we expect any surprises? My guess is that your set will be heavily based on “Glory To The Brave”. What do you say?

Oscar Dronjak: Let me tell you that there will be many songs from that first album but the set list won’t be heavily based on “Glory To The Brave”. It will be based on our entire back catalogue. We are not gonna do a special retro show because we did that 18 years ago! We are gonna do the best Hammerfall show that everybody expects from us…that’s for sure! Maybe one surprise for you guys…but I can’t tell you anything else (laughs)! 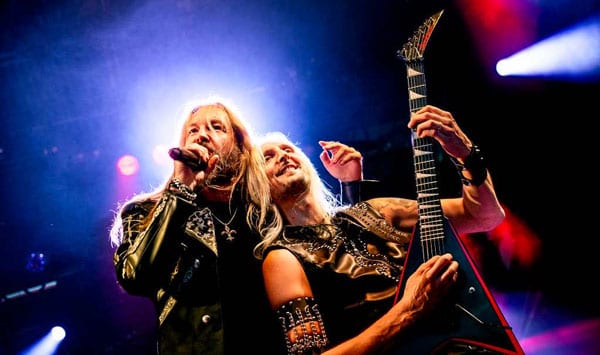