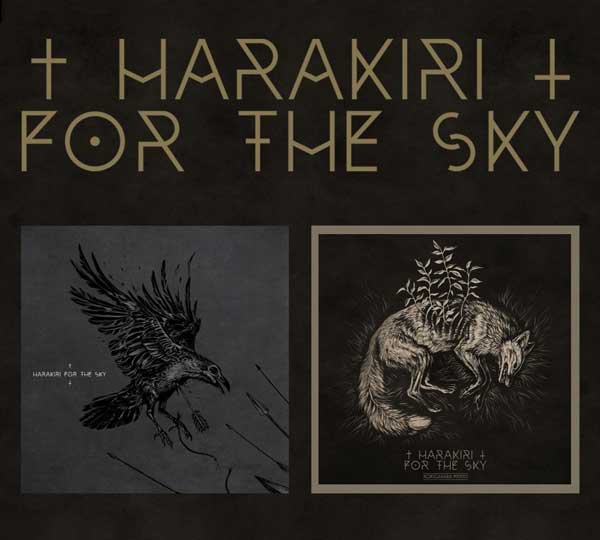 Re-recordings are something that fans of this treat with great reserve or even distaste. Not without reason of course. It’s hard to get the original feeling out of a record that people have loved, especially when it’s made by iconic bands decades later. But the beloved Austrians did it the right way, giving their first two albums what they lacked. The debut “Harakiri For The Sky” came out in 2012 and “Aokigahara” (a forest in Japan where many suicides take place) in 2014.

Now, they present them to us again. So, let’s look at similarities and differences with the original versions. First, the covers. Designed by the same artist (Tristan Svart), they are variations on the originals and not something entirely new. Right move. Second, the drums. In the first recordings, they were programmed. Here they are taken over by Kerim “Krimh” Lechner, who has played in their last two albums and tours with them whenever his schedule with Septicflesh allows it. I think I don’t need to mention the huge difference in both the sound and the fillings that one of the top drummers in the extreme metal field has put in.

Third, the vocals. In the first two albums Michael “J.J.” V. Wahntraum had a style quite close to classic black metal, while from the third “III: Trauma” onwards he went towards the more familiar with screams. It is therefore natural for him to rewrite them in the way he has been singing in recent years, both in the studio and in concerts. Which is much more suited to the band’s music anyway. I should note that in “Aokigahara MMXXII” we meet again the guests on vocals that were also in the original version, namely Benjamin “Seuche” Feddern (Fäulnis), Torsten Hirsch (Agrypnie), David “Eklatanz” Conrad (Heretoir) and Cristiano “Plague” Rastelli (Hagzissa).

Fourth, production. As then, as now, everything (recording, mixing, mastering) has been handled by guitarist/bassist/composer Matthias “M.S.” Solak. More experienced now though, the sound is much cleaner (not polished of course) and sharper, making everything sound as it should. Fifth, the compositional and playing differences. Infinitesimal to non-existent. Unless you put every song side by side and start comparing. The tempos, the riffs, the incredible melancholic melodies, the despair in the vocals haven’t changed. The feeling they give you is the same, they have kept their identity and characteristic sound intact. That is, what all their fans wanted.

Essentially, what the Austrian post-black metallers have managed to do is to give their first two releases a better and more refined form without removing all those elements that made them special. Plus, the unusual but excellent cover of Tears For Fears’ “Mad World” made it onto the regular release of “Aokigahara MMXXII” after originally only being on a limited vinyl cut. All in all, we are dealing with two re-recordings that deserve the attention of any Harakiri For The Sky fan.