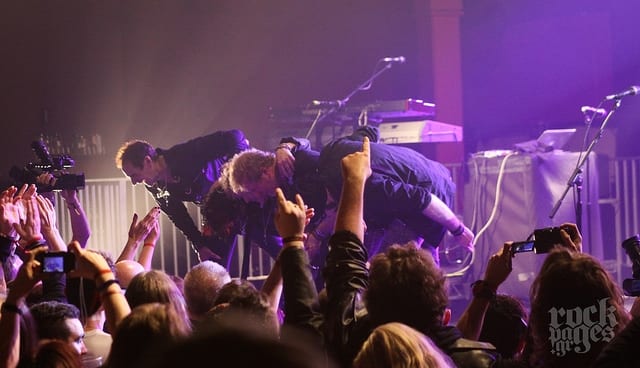 The third of the festival was the “main battle” for Rockpages.gr as it begun getting out of bed early to do back to back interviews in the basketball court turned into media area with radios, magazines and webzines sat on tables and interviewing away all the festivals’ bands. Of course, we didn’t skip the “most important meal of the day” which is breakfast, English of course! And yes we confirm that metalheads prefered beer over coffee, or tea and we also confirm that we saw people going to the pub in their pj’s… and no it wasn’t that close!

White Widdow: 4 o’clock on Saturday meant only one thing for the Greek team… White Widdow! Having seen the recently in Athens at Bat City, their amazing performance left a lot to be expected and the Aussies didn’t let us down. Seeing them for the first time in a big stage we spotted Jules Millis’ frontman virtues, being energetic and moving all the time, while the rest looked better… lit than in Athens, even though they seemed a bit restrained, maybe because the crowd wasn’t as warm as the Greek (cliché!).
What was surely was a big surprise for us was the sticker on Ben Webster’s bass (check out the photo below), as far as the audience is concerned it was their version of Aviator’s “Frontline”, which they also played in Athens. I wouldn’t mind if they played another of their songs from their three albums, instead of a cover, but it certainly went down well and they win the crowd with their performance, while they were definitely the most travelled band in the festival, since they come from Australia. 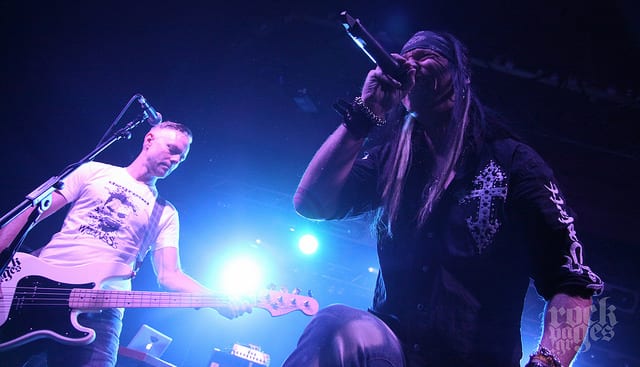 Eclipse: Eclipse was the big surprise of the festival. Not that I wasn’t aware of their capabilities or the quality level of their catalogue; but I didn’t expect such an energetic and grandiose live show by the Swedish outfit. Right from the very start, with “I Don’t Wanna Say I’m Sorry”, the crowd was blown away and carried away to Eclipse’s frantic pace. Immediately one thought emerged: this band should have been higher to the bill of bands. The singer, Erik Martensson, did a magnificent job and the line of fans cued on the bar, after the show, proved that there were far too many that shared the same opinion with me. An excellent show by Eclipse!
Sakis Nikas
Eclipse  Setlist:  I Don’t Wanna Say I’m Sorry, Stand On Your Feet, Wake Me Up, The Storm, Battlegrounds, Breakdown, Blood Enemies, Wide Open, Ain’t Dead Yet, Bleed & Scream, Breaking My Heart Again 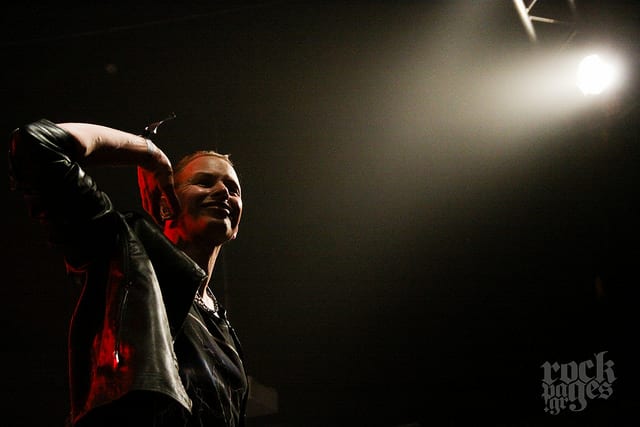 Crazy Lixx: Crazy Lixx has built quite a good reputation in the last 5 or so years and their concert in Wales was a good opportunity for us to check out if the rumors were true or not. The set list was based on the band’s last self-titled record and on the sensational “New Religion” and I must say that I was impressed by Crazy Lixx although the singer Danny Rexon was unusually reserved due to the fact that this was the first time that he would have played rhythm guitar on stage.
Sakis Nikas 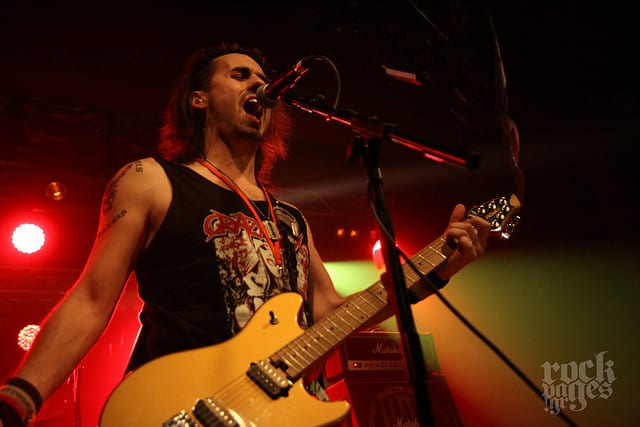 Houston & Romeo’s Daughter: I’d expected a better show from both bands. Especially Houston has left me under the best impressions with their studio offerings but the reality is that I experienced a below par performance by them. Romeo’s Daughetr, also, played an anemic show although we must have in mind that this band revolves around the pop rock genre and it doesn’t rely on heavy guitars. The other negative factor was that those bands were unlucky enough to follow Eclipse’s and Crazy Lixx’ highly energetic shows.
Sakis Nikas 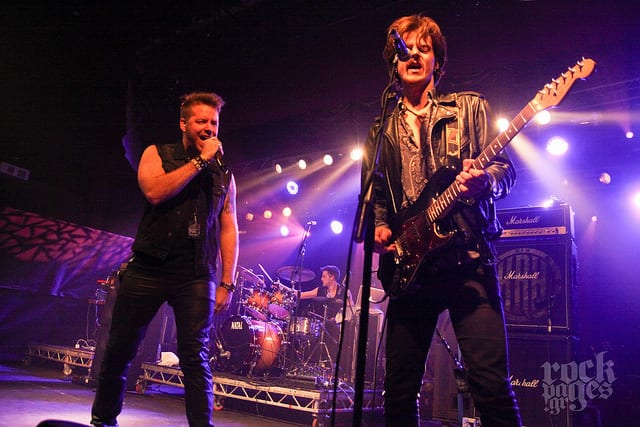 The Admiral Sir Cloudesley Shovell: Within the festival’s united character combining Hard Rock Hell and Hammerfest the action was shared in two, three, or even four stages at the same time, so punters had the chance to catch several things live. So, I left the other two members of the Greek team behind watching Romeo’s Daughter to check out The Admiral Sir Cloudesley Shovell on the stoner stage that was now transferred next to the AOR arena (how convenient!).
Energy, attitude, drunken riffs and Brit humor proved great fun for the large audience to choose to spend an hour with the band. Louis, the bassist of the band-which took its quite lengthy name from an English admiral from the 18th century, whose house was close to the band memebers favorite pub- was jumping in the air whenever he felt like bringing memories, or images of Wayne Kramer and MC5, while on guitar and vocals Johnny Gorilla wasn’t holding it back at all. Superb! 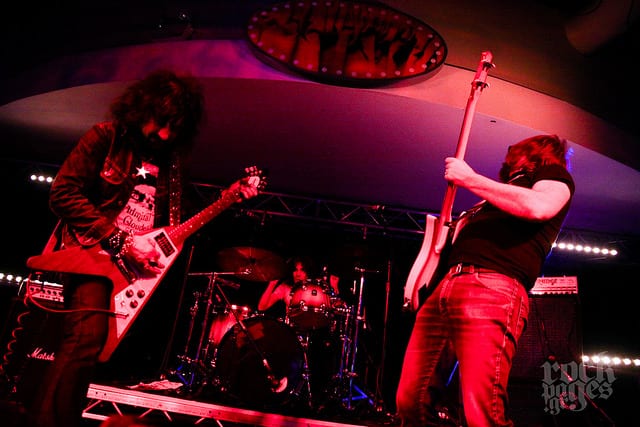 FM: FM is one of my all-time favorite bands thus I was eagerly anticipated their concert as I haven’t seen them live before. Steve Overland was an imposing figure on stage and he was both cool and impressive on both his vocal duties and the overall stage presence. During their 60-minute set they managed to squeeze in as many classic songs as possible (I’d have loved to listen to “The Other Side Of Midnight”…maybe, next time) and the pleasant surprise was how the fans reacted on the new song “Diggin’ Up The Dirt” from the upcoming album “Heroes and Villains”. They absolutely embraced it and sang along to it! The FM show was the ideal warm-up for what would follow with Night Ranger…

FM Setlist:  Tough Love, I Belong To The Night, Don’t Stop, Closer To Heaven, Digging Up The Dirt, Let Love Be The Leader, That Girl, Wildside, Bad Luck, Tough It Out, Crosstown Train, Burning My Heart Down 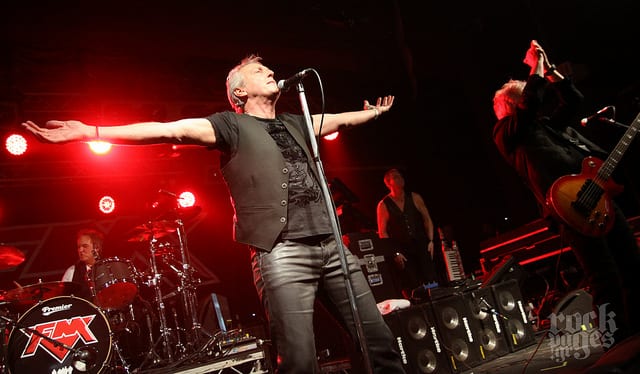 Night Ranger: Night Ranger was the main reason of booking my tickets many months ago for Wales and England. Having seen them live in London (check all the details on Rockpages’ live report elsewhere on the site), I knew exactly what I should expect and that was: energy, an excellent set list and an overall fabulous live performance by the American legendary band. That’s exactly what I got from them in Wales, too! For all the trivia lovers out there, let me say that they chose to play four different songs compared to the London set list. Those were: “The Secret of My Success”, “Rumours In The Air”, “Lay It On Me”, “Knock Knock Never Stop”. The fans never stopped –not even for mere seconds- to support Night Ranger and sing along to all the well-known hits…needless to say that Night Ranger were the absolute headliners and the top show of Hard Rock Hell! After the end of the concert, we were lucky enough to say a quick “hello” to the band and for this writer was surely a dream come true as I grew up with this band and I follow their career for three decades now! Hard Rock Hell reached the end but as the song goes…the memory remains!
Sakis Nikas

Night Ranger Setlist:  Touch Of Madness, Sing Me Away, Rumours In The Air, Lay It On Me, Four In The Morning, Coming Of Age (Damn Yankees), Sentimental Street, Knock Knock Never Stop, The Secret Of My Success, Hey Jude (The Beatles), School’s Out (Alice Cooper), Crazy Train (Ozzy Osbourne), High Road, Don’t Live Here Anymore, Eddie’s Comin’ Out Tonight, High Enough (Damn Yankees), Goodbye, When You Close Your Eyes, Don’t Tell Me You Love Me 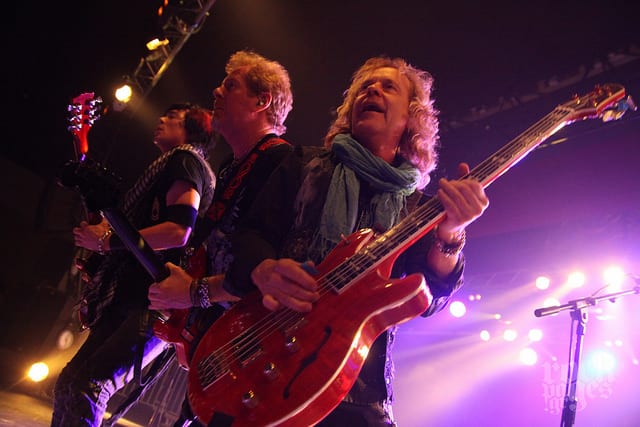