Having become permanent habitués of Hard Rock Hell for many years now, everything in Pwllheli Wales seems more and more familiar each time. The venues the festival takes place, the beautiful scenery that surrounds them and more than all these, the people there.

This year HRH took place a little earlier and this along with good luck of course helped so that we avoided all this bad weather of the previous years. On the contrary the sunshine was a pleasant touch for all of us who were there for the long weekend. Let’s see what was included in this year’s Hard Rock Festival which this time was called Helloween since it took place a few days after Halloween!

This day, the first day of the festival, is always the most difficult since a six and a half-hour trip from London is preceded. It takes so many hours for someone who has decided to travel there either by train or by car. But the beauty of Wales makes it up for all the trouble you have been through. The first band I have time to see on the small stage (the big stage is closed on the first day) is Massive Wagons, a band that we have recently presented on Rockpages.gr and which I believe has borne out everything I had pinpointed  in the presentation of “Fight The System” which was released the year we are running. It was a dynamic, full of energy show so it wasn’t without reason that they were applauded long and loud by the audience. A special moment at the set of Massive Wagons was the very good cover of “Highway Star”. 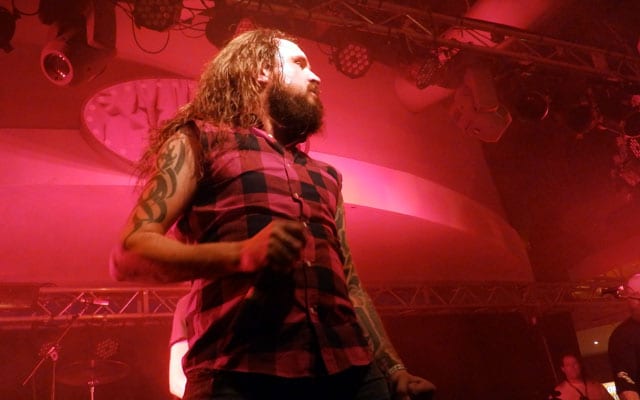 Lizzy Borden were next with a really hot show by Lizzy who changed countless of freaking masks and a very well bonded band surrounding him. The set began with “Master Of Disguise”, we heard “Long Live Rock n’ Roll” quite early before the first half of the show which closed, as usual, with another cover of “Born To Be Wild”. Let me underline that “Love You To Pieces” was conspicuous by its absence. Godsized followed but let me be forgiven; the fatigue of the day was unbearable. 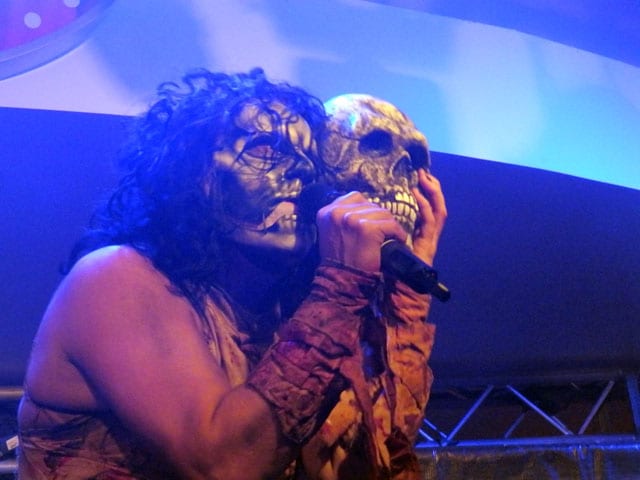 There are a lot of people at the small stage early on since there you can see quite a few good and rising bands. The shows of SKAM, Persian Risk, Western Sand and The Black Marbles have distinguished. At the same time on the big stage opposite, Electric Mary give a great performance. I’m not very keen on The Brew musically but on stage they give out incredible energy.

Next is one of the audience’s favorite bands, Y&T, as shown from the beginning. The Americans’ show was almost excellent. We watched a best of show with a band in perfect shape and the crowd excited for an hour; that is how long the performance of Y&T lasted. In my opinion the best moment was the performance of “Midnight In Tokyo”. The first half of the song was acoustic and the second half was as we all know it. In the end and while Meniketti was announcing another piece he was informed that he had to end the set as the program had gone  about half an hour behind schedule. I guess that piece would be “Forever”. 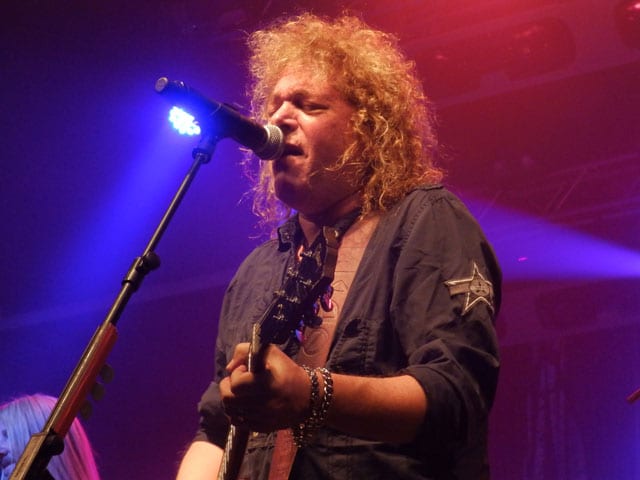 I was expecting Krokus to be good and they didn’t let me down. Maybe the setlist could be a little better but their performance was nothing but the best. The absence of “Tokio Nights” and of some other songs we would like to hear was more than obvious. The truth is that if “Screaming In The Night” was missing there would be a problem, as it was the best moment of the Swiss’ performance. The show closed with Bob Dylan’s cover, Quinn The Eskimo (The Mighty Quinn). 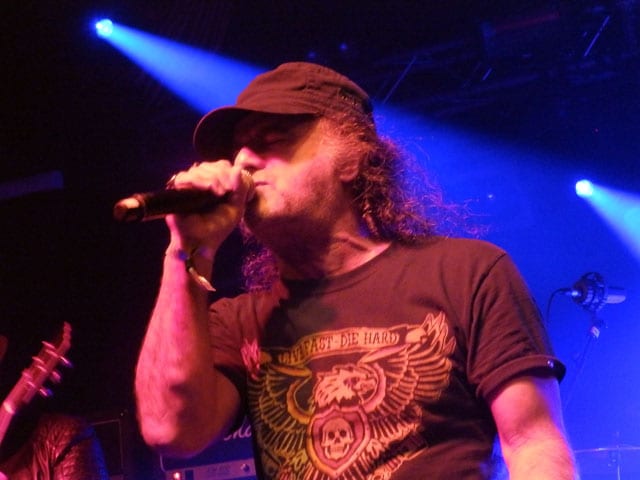 Queensryche have already won the bet. Refreshed more than ever, they interrupted their shows in America for the sake of Hard Rock Hell. With a really long show, 75 minutes, they were the real headliners of the day giving an excellent performance and bringing back a lot of memories with their pieces from their first epic albums to “Empire”. They started (as in all their shows in 2014) with “Nightrider”, a song they hadn’t played since their “Rage For Order” tour (1986-1987), lashing the audience from the first notes. The band’s mood on stage is easily noticeable and imparted to the audience who sings all the lyrics along with la Torre by screaming. Wilton, Lundgren and Jackson do their best and so does Rockanfield, with his calming power, behind the drums. It was a flawless performance from every point, and it seems that Queensr?che return where they deserve to be. 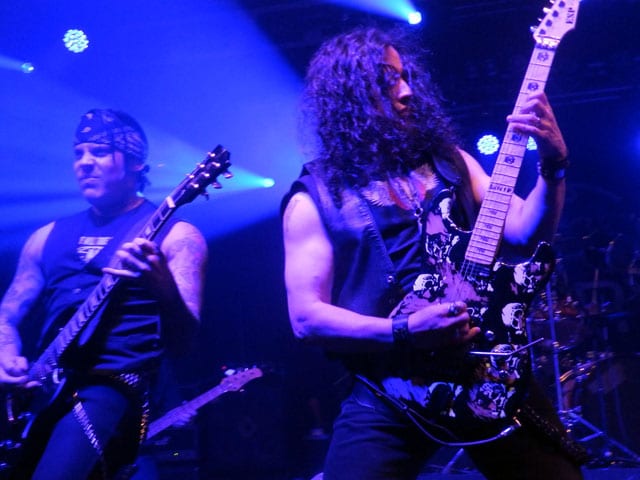 The last band of the day was Bonafide. The Swedish quartet is once more drum fire as in their previous performances at the festival. Great band and you shouldn’t miss it if you find it somewhere close to you…

On the small stage at 12.00’ More 2012 (old More) excite the audience in front of the stage which is increasing steadily. Chris Tsangarides and his collaborators give lessons of traditional hard/heavy sound performing “Touch Of Evil” of Judas Priest in an excellent way. A very good performance from a band which has been present for forty years but, whether you believe it or not, they are just now preparing their third studio album.

Setlist: Killer On The Prowl, Warhead, Rock n’ Roll, Road Rocket, We Are The Band, Scream, A Touch Of Evil, Way Of The World, Atomic Rock. 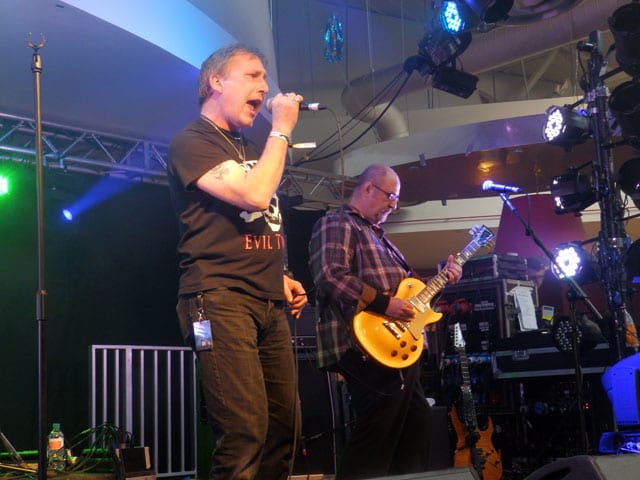 Unfortunately I don’t have time for good bands such as Blue Pills, due to my engagements in the press room but the good thing is that I have a lot of stuff for you.

I had heard a lot of good things about Truckfighters and the band didn’t prove them wrong on stage. It was a very powerful performance. They made a very good impression with both their music and their stage scenery.

Next are Vardis, a band which I considered “finished”.  But if a “finished” band is playing like this then that’s what I want to hear. Vardis literally made me lose my voice with their brilliant performance on the stage of HRH. We were the witnesses of a performance full of power and incredible energy by musicians who aren’t in their prime and who haven’t got past glories to “step” on.  A past that starts in 1973 (as Quo Vardis), they broke up from 1977 to 1986 and they reunited in 2013.

Few people have dealt seriously with that band and I recommend that the friends of classic heavy rock check them out. 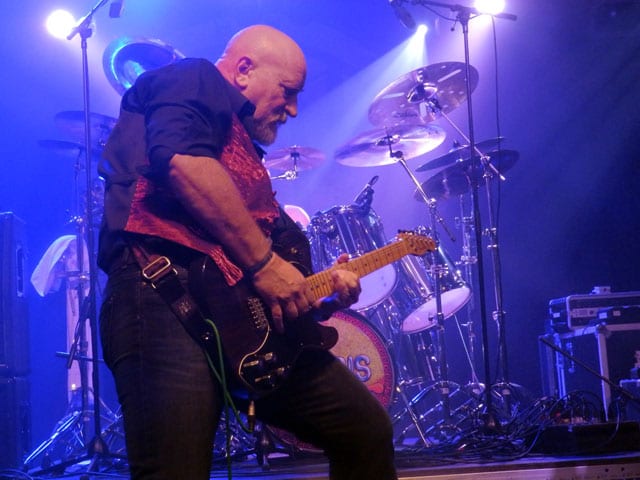 I must say that Big Elf was the band most talked about at the venues of the festival, before and after their show. They all wanted to see them and they all seemed ecstatic after 80 minutes that the Californians’ show lasted on stage. With the singer as the main presence and Damon Fox at the keyboard, they gained the audience with their abilities and inventions as much as with their incredible performing. Fox is an incredible frontman, his stage performance reminds a little bit of Alice Cooper and as he stated himself later on during our interview, The Lord of the Darkness is one of his major influences. BigElf came up to the audience’s expectations and I think that’s a lot for a new musician to ask for at his career. 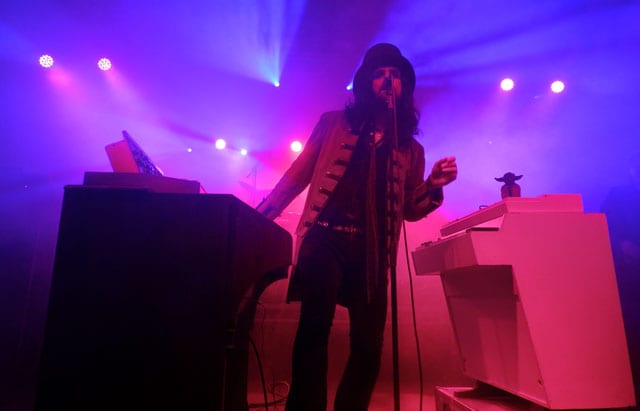 I’m not that lucky with Diamond Head. It’s the third or fourth time that I have come across them at a festival and I haven’t managed to see them yet. These things happen in cases where you have to be in two or three places at the same time.

Introduction  and…. “Doctor Doctor”. We could talk about the three fifths of Scorpions, right? With Francis Buchholz at the bass and Herman Rarebell at the drums, Michael Schenker has one of the best bands of his career. I also liked Doogie White more than in his past live performances. The setlist was great but I have to point out the extremely blasé look on Michael Schenker’s face who was continually “playing” with the camera that was recording their show. There were around two thousand five hundred people there for him and he had to respect them more. Other than that, their show, musically speaking, was exceptional.

Setlist: Intro/Doctor doctor, Where the Wild Winds Blow, Armed And Ready, Natural Thing, Victim Of Illusion, Lovedrive, Coast To Coast, Before The Devil, Lord Of The Lost And Lonely, Shoot Shoot, Vigilante Man, Rock You Like A Hurricane, Rock Bottom, Lights Out. 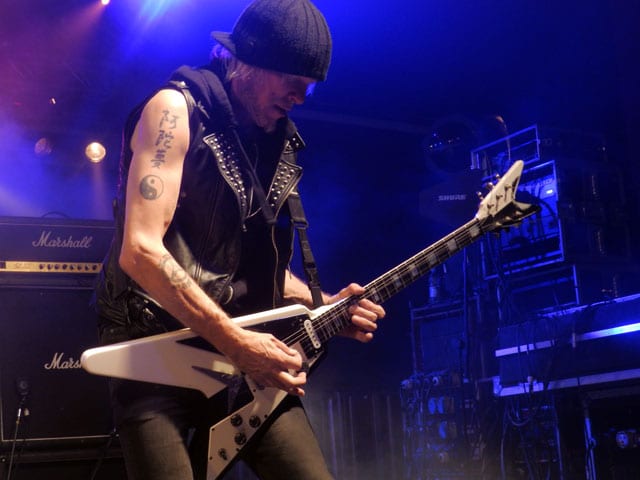 Blue Oyster Cult: Band-Guarantee!  There’s no chance that they aren’t very, very good! That was the case all seven times that I had seen them so far. There’s no reason that this time will be different. A start with “The Red And The Black” and a perfect show from the American legends. Eric Bloom, Buck Dharma and Richie Castellano, who teach music and communication with the crowd each one his way, are the main “characters” of the show. The audience enjoyed eighty minutes of magical music and it was more than fair to give them such a big applause in the end even though some of their favorite songs were missing.

Setlist: The Red And The Black, Golden  Age Of Leather, Burnin’ For You, Career Of Evil, Bucks Of May, Godzilla, (Don’t Fear) The Reaper. 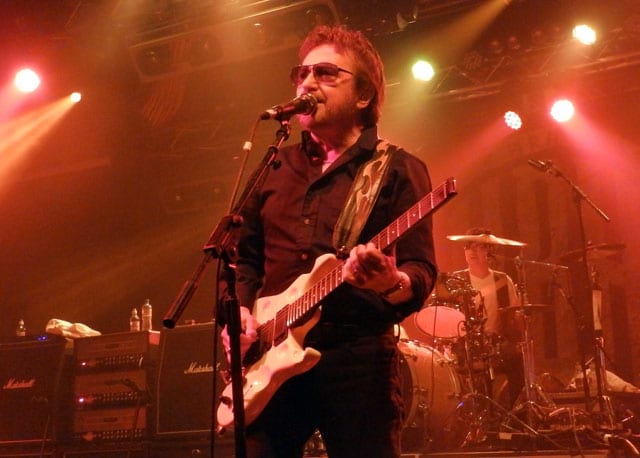 Hard Rock Hell VIII is coming to an end and after the drum fire of Blue Oyster Cult the place is emptying. It’s a good opportunity for me to see the eternal teenagers more easily. Girlschool are “juggernauts”.
I like to call them “the female Motorhead” a name they confirmed on stage. It was a great show with incredible dynamism and a lot of rock feeling. Jackie Chambers, a unique guitarist and an excellent performer, was in the best mood of all. With songs such as “Demolition Boys”, “C’mon Let’s Go”, “Hit And Run” and so many others, they excited all the people who have remained in the room and they closed with “Emergency” a song which became a hit after Motorhead had covered it.

Vintage Caravan closed the festival with a significant performance at least the first half of it because that’s how long I had the strength to watch.

Before I close I would like to thank once more this great team of Hard Rock Hell production for their hospitality and their  help in everything I needed and to set  these people as an example of organization and of course of  attitude. I’ll see you next March at Hard Rock Hell United (Hammerfest and HRH A.O.R) where there will be Greek performances as well!