For those who have never been to Bergamo, Italy, a concert is a good reason for you to travel there. Bergamo is one of the most beautiful cities in Italy and less than 1 hour away from the city of Milan.

Frontiers festival also takes place In ‘’Live club’’. On the 24th and 25th of October of 2015 I went to Italy to watch Hardcore Superstar and Michael Monroe live for the second time. And that’s because the first time both bands kicked ass.

For a rock and metal fan, Bergamo has one big pub 25 minutes away from the centre which is called Keller Factory and you can enjoy good rock and metal music while you eat pizza. Downstairs there is a small live stage where you can watch every week an Italian metal band. I was lucky enough to catch live a brand new thrash –nu metal  band, Megashark. But the headliners of the night would be a tribute band to Pantera that unfortunately didn’t have the time to watch. I had to sleep well because next day I had the big live show of Chase The Ace, Michael Monroe & Hardcore Superstar. 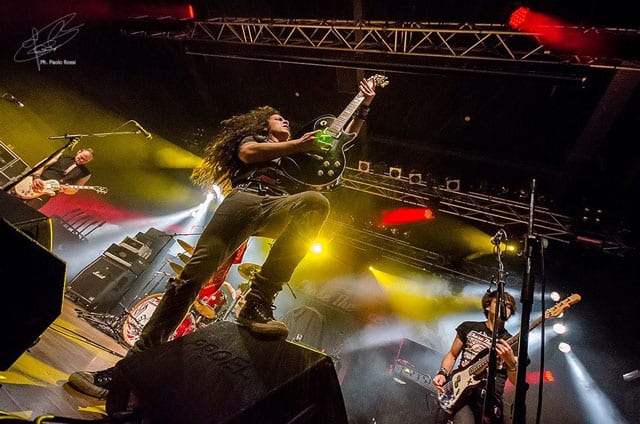 When I arrived at the venue, Chase the Ace had already started playing and you could tell that the sound of the club was more than ok. It was absolutely right. The band’s sound was crystal clear from wherever you were standing. Chase The Ace are from England but the most members are of Israeli descent. Not very common for a new hard rock band. Unfortunately, the band was not that good. They might be good musicians and perform good enough live, but they do not have any hit songs. Their material sounded exactly the same. So they didn’t convince me to buy their new cd or a t-shirt, although Chase The Ace was the only band with merchandise.

Exactly half an hour after Chase The Ace, Michael Monroe and his touring band came on stage. The members were Sami Yaffa (New York Dolls, Hanoi Rocks), Steve Conte (New York Dolls), Rich Jones (The Black Halos)and Karl Rockfist (Steel Prophet). Rich Jones became a part of the band for this tour because Dregen (Backyard Babies) couldn’t be there for this tour. The band was amazing, too professional and in their best mood. The one and only Michael Monroe was ready and willing to make everyone a part of the concert and until the end of the show that’s exactly what happened. Even those who were a bit distant became a part of the absolute rock n’ roll party. 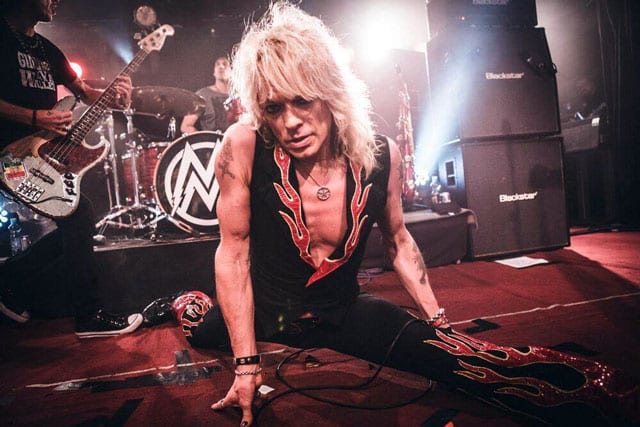 I listened to many songs of the last 3 albums but not many from the 70s and 80s era. Most songs were accompanied by Monroe’s harmonica and saxophone. With his amazing moves and flexibility Monroe made the show more than just a good music show but also a candy for the eye. They played for almost an hour and a half but it seemed like 15 minutes. Everyone was asking for more, although most of them were there for Hardcore Superstar. Once again the show was great and everyone danced until the end that we listened to the hits ‘’Up around The Bend“ and ”Dead, Jail or RnR”. After the encore, he also played “Νοthing’s alright” and “I Wanna Be Loved” but no one really cared. More than 6 times we enjoyed his trademark splits and while at the end of the show  he jumped off the drum set. Michael Monroe is one of the most capable frontmen of the glam scene although he is 53 years old. It was the best warm up possible before Hardcore Superstar came on stage.

’78, This Ain’t No Love Song, Old King’s Road, Trick of the Wrist, Oriental Beat, L.E.S, Man With No Eyes, R.L.F, Goin’ Down with the Ship, Hammersmith Palais, Got Blood?, Stained Glass Heart, Tragedy, Malibu Beach Nightmare, Up Around the Bend, Dead, Jail or Rock ‘n’ Roll

Nothin’s Alright, I Wanna Be Loved 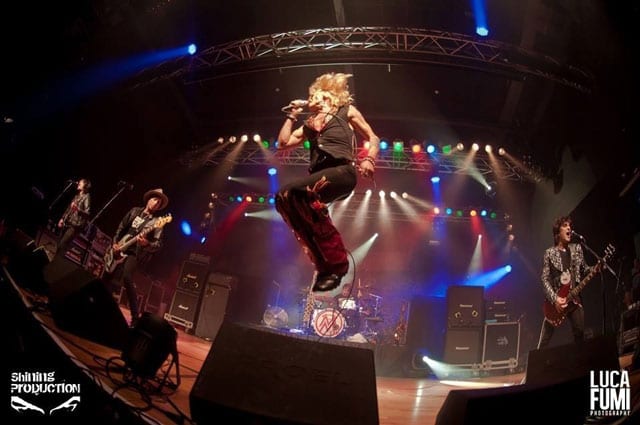 This review is not enough to describe the show I witnessed. Especially the feelings I had while I watched this band live for the second time. I believe that Hardcore Superstar right now is one of the best hard rock sleaze bands live. Still, very young but they have already released 10 very good albums. Italy is like their second home after Sweden. Every time they play there the fans lose their minds. People got crazy once again when Hardcore Superstar started their show with “Sadistic Girls”. One great surprise during the show was when Jocke called Michael Monroe to sing with him Alice Cooper’s “Long Way To Go”. It was a great moment for all, especially for Jocke who revealed that he was a Hanoi Rocks fan since he was a little boy. 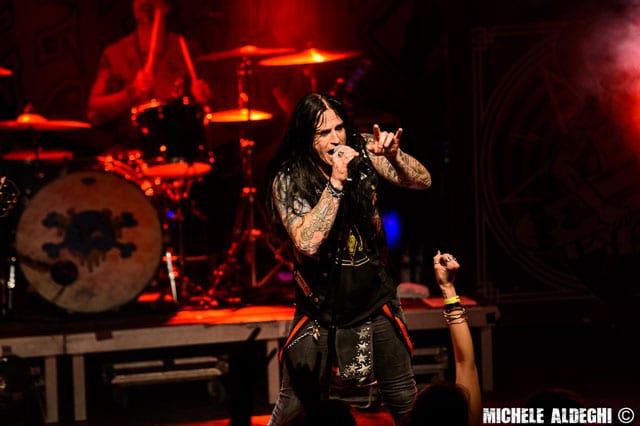 A few minutes before the end of the show a crew member of HCSS started to take parts of the drum set while Magnus was still playing. In the end of the song he only had the snare drum and hi-hat. The rest of the band grabbed their crew member and punished him by throwing him in the audience. He was lucky enough that we caught him. The band’s adrenaline level was over the top. The fans took a small break from headbanging while Jocke and Vic played ‘’Someone Special’’ and “Standing on the Verge ‘’ with just vocals and an acoustic guitar.  Jocke’s voice was at its best!!!

There is no doubt that Hardcore Superstar will stay on top for many more years! It was a great hard rock night and only two hours away from Greece! Let’s hope that someday bands like these will have the chance to play live for the Greek fans too.
Mariza “Crash”

*photos from the Italian Rolling Stone 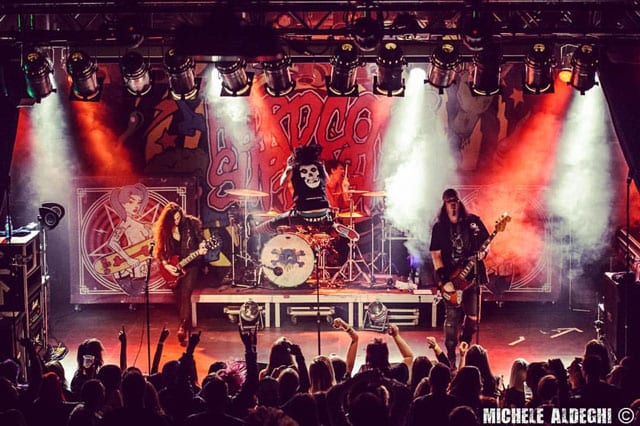