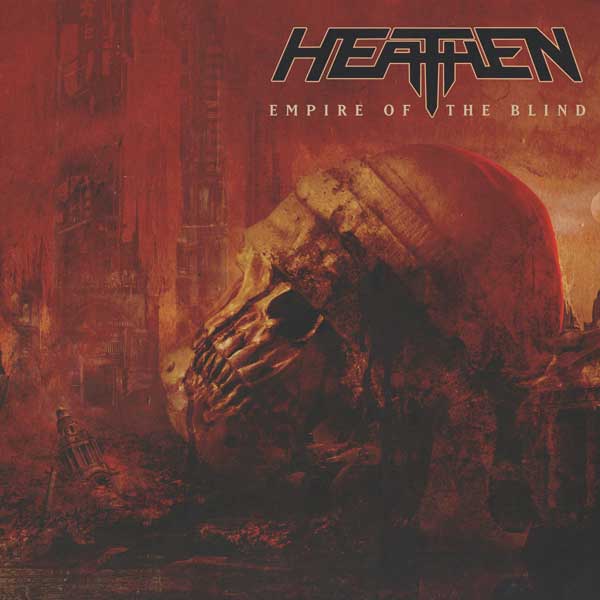 When we encounter the term Bay Area Thrash, we immediately think about influential cornerstones of the genre like Exodus, Testament, Possessed and of course Metallica. The cosmogony that took place at the wide area surrounding the San Francisco Bay involves many more unsung heroes that didn’t reach the status of the aforementioned titans but didn’t lack artistic value either. Forbidden, Death Angel, Laaz Rockit, Vio-Lence and Heathen belong to the very top, alongside those four pioneers. The inconsistency in releasing albums and the numerous breaks they took from their career may have held them back in terms of status but didn’t affect the quality of their works. It took nineteen year for Heathen in order to release a sequel to Victims of Deception but that didn’t prevent them from giving us one of the best albums for 2010, The Evolution of Chaos. Now with Empire of The Blind completed, they aspire to a similar deed, 10 years later.

Truth be told I wasn’t equally surprised when I listened to the album. In the beginning I couldn’t quite pin down the reason that held back my enthusiasm. Empire of the Blind seems to be crafted by all the right materials. Impetuous, delightfully guitar-laden, carefully balanced between fast and slow parts, melody and punch. As the listens progressed I kind of pointed out the factor that held me down. The sound selected by the present guru of contemporary American metal, Zeuss, is not desirably Heathen-like and doesn’t do the album justice. I get the fact that the big record companies have a certain way of dealing with releases like this but the only moments I felt like spinning a Heathen album where during the delightful solos. This might sound a bit strange or unfair even but no matter how hard I tried I couldn’t shake off that particular sense and delve into the album with a different approach. I should make a special mention though for the best song of the album, the melodic masterpiece that Sun In My Hand is. Starring the astonishing guitar work by Altus and Lum. The instrumental A Fine Red Mist is a close second, featuring the Holt, Hunolt and Piercy rat pack for an extra dose of guitar mayhem.