Some time ago, I wrote an article about movies that have to do with the rock/metal culture, the bands, the fans and the scene in general. Recently, Finland gave us an awesome film that manages to get (almost) on top of the list. This is “Hevi Reissu” (“Heavy Trip”) and it must be watched from any fan of this music.

At first, look at the poster. And then the trailer. They give you exactly the taste of what’s about to come. And then, the name of the band. Impaled Rectum. How can you not love this? The scene where they choose names is great. And of course, their style according to the bass player: symphonic post-apocalyptic reindeer-grinding Christ-abusing extreme war pagan Fennoscandian metal! Epic! 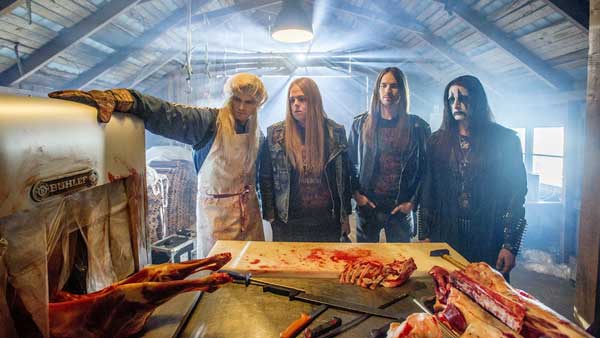 The movie is centered around a death metal band in a small village in Finland. For years, they rehearse in a basement and have not written a single song of their own. Of course, they have to deal with the prejudice of their fellow citizens because of their looks and they are looking for a way out. This happens when a Norwegian comes to town who happens to organize a big festival in the neighboring country and they try to seize the opportunity. But when things go wrong, Impaled Rektum (love that name) will do anything to play there. Their adventure involves crazy situations such as theft, kidnapping, grave robbing, Vikings, fight against the border guards and the police and of course hilarious dialogues.

In general, “Heavy Trip” is a delightful movie that describes, through various stereotypical situations (which are placed very cleverly), the dream of a small-town band to live something different with their music as a vessel. It is very fun to watch, especially if you doing with other metalheads. But only with subtitles, if you don’t know Finnish. And for you who can’t stand the death metal grows, don’t worry. They are limited in just a few minutes.