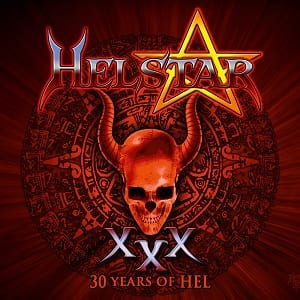 If someone would have told me a few years ago that Helstar would be celebrating their 30th anniversary with a show of the classic line-up and before that they would have returned with two excellent studio albums, I wouldn’t believe it…no way! To be quite honest and fair, both James Rivera and Larry Barragan would feel the same way like me. Never say never, though, and here we are with the first complete and technically well-crafted live album by the Texan legends (let’s not forget that back in 2000 Metal Blade released a somewhat official live bootleg from Helstar’s “Nosferatu” tour…but that was a totally different and somewhat loose live recording).
Helstar is evidently in high spirits and top form, they know that this specific appearance is being recorded for a future CD + DVD release, they present a longer set list consisting of 20 songs and the fans below have the time of their life celebrating together with their favorite band. The production is absolutely satisfying, without too many studio interventions or fixing thus the overall live feeling remains intact and pure. Also, I want to underline two things: the first has to do with the right decision from Helstar’s side to present songs from each album of their back catalogue (yes, including a song (“Good Day To Die”) from the underrated “Multiples of Black”); the second one reflects Barragan’s and Trevino’s flawless guitar work. They both shine with their sharp, aggressive but also melodic riffs/solos and they actually rejuvenate some classic moments
especially from the “Burning Star” record.
As I write this lines, I haven’t seen the DVD but I am sure that it will be of the same quality level as its audio counterpart. So…Happy 30th Anniversary to Helstar! Happy 30th Anniversary to Texas Metal! Let’s go for the 40th now…
Highlight: You should definitely listen closely to Rivera’s narration of how he met barragan back in 1982 and formed Helstar…very enjoyable, indeed!