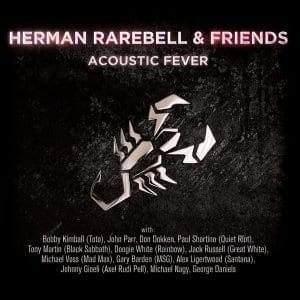 It’s really impressive the fact that Scorpions has recorded so many and so big hits over the years! I can’t even imagine how many people all around the world have reserved a special place in their hearts for the German outfit due to the sheer magnificence of the compositions themselves. Crazy Rock Tracks, Mid-Tempo songs, wonderful ballads…you name it! Scorpions has done it all and then…some more! I know that you are fully aware of all this information. What you probably don’t know is that the band’s former drummer, actually the drummer of the classic line-up, Herman Rarebell, has just released an excellent acoustic album called “Acoustic Fever”.
And it’s not only the cover versions of all those well-known hits by the Germans (all of the songs that are included here have been co-written by Rarebell) that really win over the potential listener. The ace in Rarebell’s deck is the presence of some really remarkable and famous singers that do their best in interpreting those mega hits of the band. Let’s not forget that Scorpions themselves have attempted a few years ago the same endeavor But, I strongly believe that Rarebell has done a far better job as the guest singers create a unique variety to those familiar to all of us hits. After all, it’s not an everyday thing to listen to Don Dokken sharing a heartfelt rendition of “You Give Me All I Need”, Bobby Kimball rocking like a hurricane on…well, you know on which song, John Parr easily stealing the show with the best cut on the album with “Passion Rules The Game” while Tony Matin is quite impressive on the aggressive “Another Piece of Meat”. And the list goes on and on… Johnny Gioeli, Doogie White, Michael Voss, Gary Barden, Jack Russell, Paul Shortino are some more names that guest on the album.
I sincerely believe that “Acoustic Fever” is an album aimed not only to the die hard Scorpions fan but also to all the appreciators of the 80’s melodic hard rock sound and we are far too many, I must say!
Highlight: Don Dokken’s voice might not reach the heights of the past but it is still capable of giving you chills down your spine!