For the first time ever, HiRock Festival took place in Germany on June 1 & 2, 2013 – not in just one location, but two venues that were several hundred kilometers apart. The “Who is Who” of 80s melodic rock was scheduled to play in the Loreley amphitheater in the Rhine River valley as well as an indoor venue in Inzell, Bavaria. The bands who played one venue Saturday were scheduled in the other on Sunday – and vice versa.

The amphitheater (“Freilichtbühne Loreley”) is a beautiful place to be, as the open air is embedded in the scenic tourist area next to the famous Loreley Rock.

Yet that weekend people were a little worried about the open air factor as the forecast not only announced heavy rain, but flooding in the nearby cities downhill. So most people came prepared with waterproof shoes and raincoats and several layers of clothing as it can get chilly up on the rock.

When we entered the site it was obvious that this was no mixed metal festival that I am mostly accustomed to. The crowd consisted of only a few people in their 20s and 30s, the larger part was much older as I have seen lots of gray hair (no offense). Therefore the atmosphere was easy going; no bumping or pushing, all relaxed.

Saturday afternoon saw British AOR band FM as the opener. A few thousand people were already there, but it was also obvious that many would show for the main bands at night.

Rick Springfield was my first highlight as I had never seen him live. From the beginning he experienced some sound problems and frenetically changed his guitar after every song to have it tuned. Rick acting so hectically left me kind of uneasy and agitated. Still, he was putting on quite a dynamic show while his band seemed glued to their spots, it just wasn’t a match. I was surprised to find out that Rick is as old as my mother, yet he still looks quite yummy. He did not hesitate entering the crowd for his hit song “Human Touch”, walking all around greeting people, having sips of their drinks and – well, touching them, as the song suggested. It made him very humble and he truly came across like a nice guy. Unfortunately, his voice is not what it used to be. I don’t mean that in a bad way – he absolutely has my sympathy and I very much enjoyed seeing him live. But compared to the other singers his age, his vocal performance was rather poor. I’ve still enjoyed his old hits “Celebrate Youth”, “Jessie’s Girl” or “Don’t talk to strangers”. 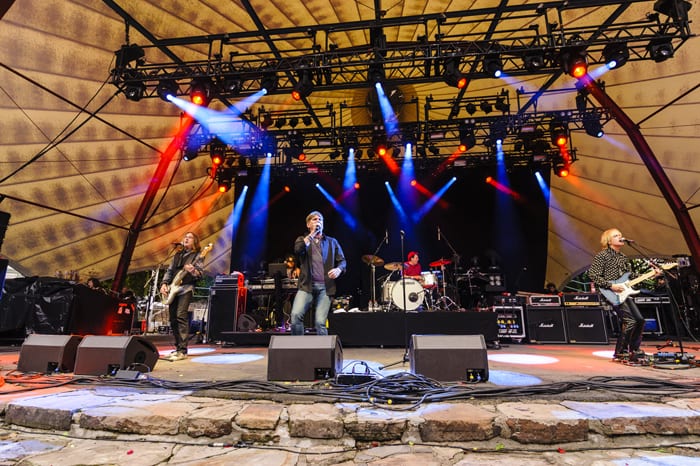 Next up were Survivor. The first thing that crossed my mind was that you could tell this band was a unity, having fun and feeling and moving to the music while playing. The sound was also not the greatest, and as this was my first time at Loreley, I was wondering if this was due to allover bad acoustics in the theater. Well, let me tell you – it was not as I would soon find out.

Headliner for the night were Toto. As I had never seen any of Saturday’s bands before, I’ve approached them rather unbiased. When Toto started, all of a sudden everything was in tune. The sound was perfect when they were featuring their old classics “Rosanna”, “Africa” and “Hold the Line”. The illuminating light show in the approaching darkness was just overwhelming, and their pianist (yes, they have a keyboarder and pianist!) was so much fun to watch as he was so into what he was doing. What a perfect show! 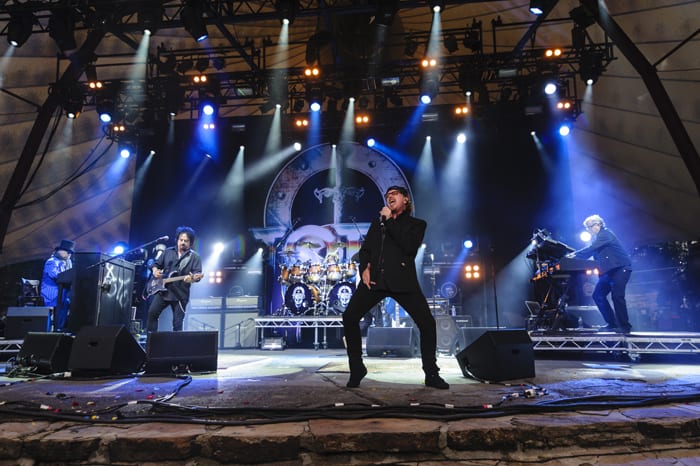 By the time the show finished around 11pm, it had gotten quite cold – yet it remained dry.

Here comes the Flood Part I.

On Sunday the downhill villages, St. Goar and St. Goarshausen, prepared for the flood. All stores and restaurants in the historic district were emptied and closed as they knew the pumps could not hold back the water much longer. It was just a matter of time before downtown was about to get flooded and the Rhine River would form a unity with the nearby streets. It was frustrating watching people trying to protect their property, but at the same time admirable that they all took it with such ease. I guess living there makes you get used to the flooding – no need to panic! 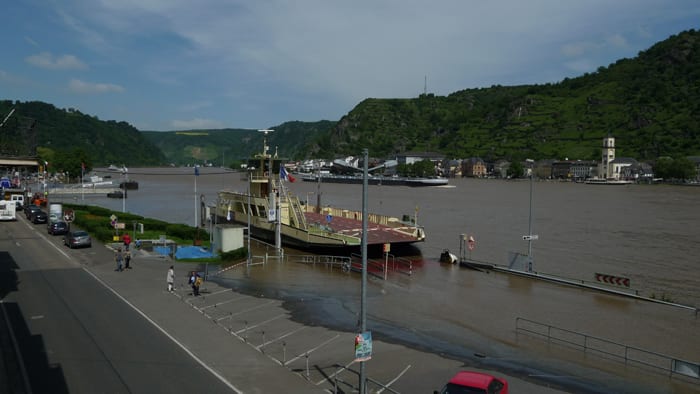 It was still not polite that the ferryman had neglected to tell festival visitors who had crossed the Rhine River on Saturday that they might not get back with their car the next day, although it had been a known fact. Luckily some locals had warned us so we had left the car on the festival side of the river when the car ferry stopped its route – the smaller passenger ferry was still in business. Although the water was approaching, the skies cleared up and it turned out to be a beautiful sunny day.

Opening band was Swedish H.E.A.T. Their rather weird singer was busy doing some strange kind of monkey dance that left me irritated and annoyed.

Next up was Black Star Riders featuring the most recent line up of Thin Lizzy. The sound was impressive and people seemed to enjoy the show. By then, number of visitors had increased significantly. Apparently the night’s headliners were attracting more people. It is hard to estimate the exact numbers, I assume around 7000-8000. 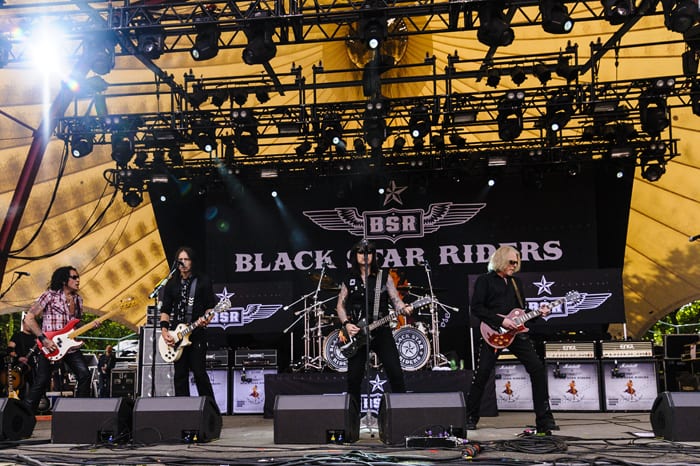 Europe’s Joey Tempest was proof that aged singers still know how to sing. Damn, his voice is still so good! 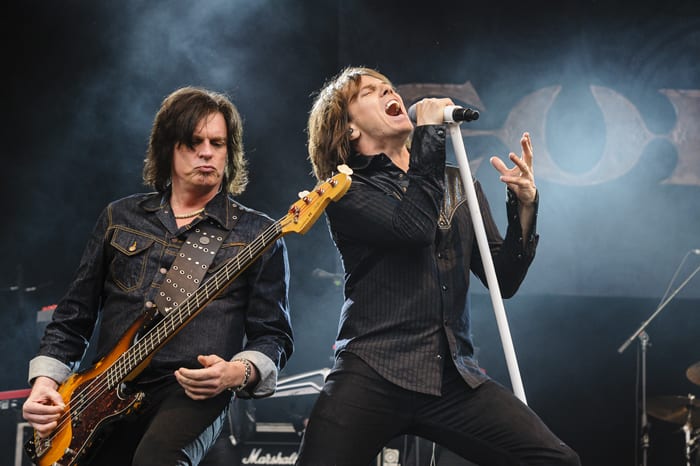 The same counts for Whitesnake, David Coverdale still knows how to rock, his voice is also in very good shape. Just that Whitesnake’s sound engineer must have forgotten to clean his ears as it was way too loud. It was such a pity he managed to destroy the otherwise good sound. The band members played quite long solos each; if you are not an expert of the specific instrument, it gets rather boring after a while. I’d rather hear them perform classic hits. Coverdale’s in between speeches were also not very inventive, so it’s best to have him sing as much as possible. “Still of the Night”, “This is Love”, “Fool for Your Lovin” and “Bad Boys” were among the tunes we all came to love many moons ago. 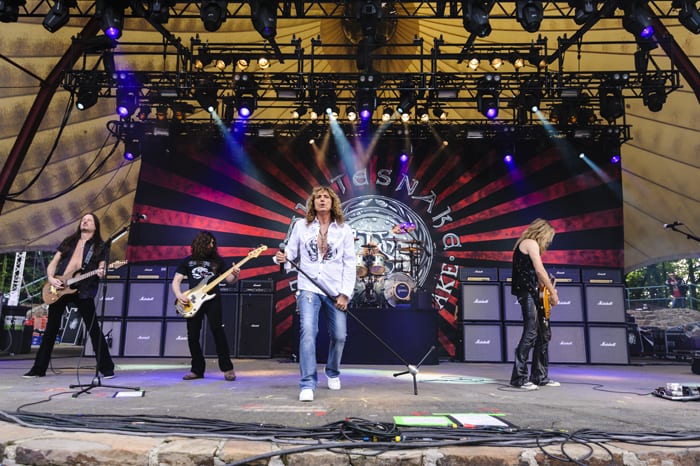 The night’s well-deserved headliner was Journey. The stage looked quite unspectacular, with no backdrop, no drum covers, just very plain. 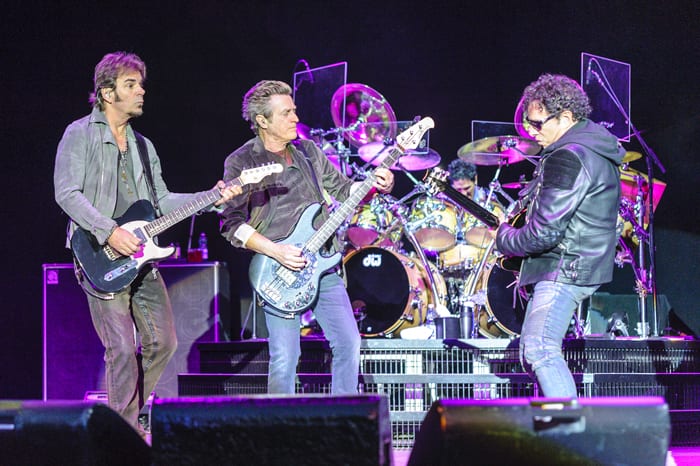 But once Filipino Arnel Pineda opened his mouth to sing like a bird, it did not matter anymore. Damn, this guy’s voice alone is so special, so unique! Take that voice in combination with the wonderful classic Journey tunes and goose bumps are guaranteed. 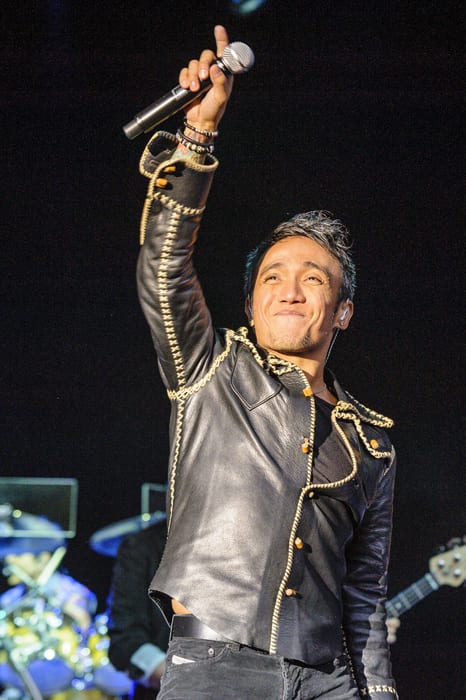 So much for a new successful festival featuring a great 80s line up! On the downside, you’ve noticed from the beginning that the organization was not experienced and had not learned from previous years. Everything was quite simple and no-fancy. They did not provide a textile wristband for collectors, but a simple paper one. There was no press area with wireless access (as there was barely any Internet connection on top of the hill). There was only one restroom facility that tended to get too busy during the breaks. People stood in line to get drinks, but not too bad. But worst of all, there were only three food stalls with a choice of five fast food meals for how many thousands of people? Care about waiting in line for two hours just to get some fries? There was so much unused room in the back where they easily could have added a few more stalls. I overheard many people complaining as their stomachs were craving for food…

By the time we left the festival site Sunday night, we were informed that the road next to the Rhine river had been flooded and we needed to take a detour as the road had been closed altogether.

We also found out that the flooding in Bavaria had progressed and government had called for an emergency alert. Apparently Rick, Survivor and Toto never arrived at the other HiRock venue on Sunday due to closed roads and traffic. So although Bavaria had the advantage of being indoor to avoid the rain, they turned out to be the unlucky ones as the second festival day had to be cancelled altogether.

So we were lucky after all – dry weather, quality of bands and breathtaking location!