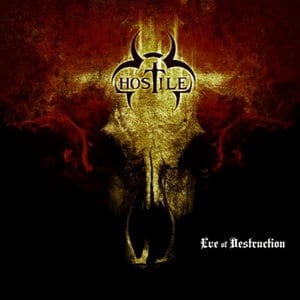 Right after his bailing out from Judas Priest, KK Downing, sits on the production chair for this band haiing from his hometown Birmingham, while he is credited to one of the songs of the album, while on bass we’ll find Ian Hill’s son. Also, frontman’s Jay Mills, and guitarist AJ’s dads are drinking buddies with KK. So, when the lads had too much to drink one night, and law abiding citizens as they are called Jay to drive them home, the ex-Priest axe man got to know about the band.
Hostile sounds like Pantera, and maybe they bring back to KK’s mind how Judas Priest roared in “Painkiller”, and in their “Ripper” years. Unfortunately, I can’t say that Hostile offers something really special. Surely their groove metal is well played, but composing-wise, they don’t have the kind of songs that will stick to your mind. “Addiction” is an interesting song, which was actually written by KK Downing, but rejected from Glen
Tipton and Rob Halford, and the youngsters cut their teeth to it.
Let’s hope that the band will find its way after the debut, and will be able to write better songs, either with, or without KK on their corner.