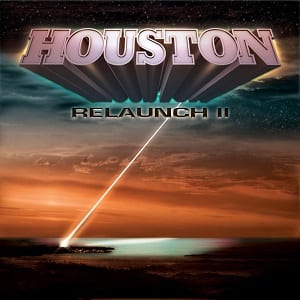 Do you remember three years ago when Houston released an album called “Relaunch” that included cover tunes, acoustic versions of previously recorded songs and a brand new cut? If yes, then I am sure that you don’t need to be a clairvoyant so as to get a grasp of what “Relaunch II” is all about. This time around Houston came up with 6 cover songs and 4 brand new original compositions but I must repeat myself –more specifically, what I underlined in my review of “Relaunch” back in 2011- by saying that once again the final result is negative and the band’s decision to…relaunch an album with cover versions of artists like John Farnham, Rick Springfield, Lady Gaga (!), One Republic (!), John O’ Banion and Florida George Line is quite honestly meaningless and pointless. After all, who listens to the original material of let’s say Lady Gaga or One Republic (for God’s sake)?

So, how about the 4 original songs…? “Don’t Look Back” (nothing in common with the Boston hit) and “Our Love” is really remarkable and remind of the good moments of the perfect debut record by Houston. These are up tempo tracks with the emphasis given to the keyboards which bring forth Houston’s talent. I wish I could say the same for the other two songs (“Downtown”, “Standing On The Moon”) which are not so bad but they pale in comparison with the former couple ones.

All in all, I’d say that this is an unnecessary release that even the most hardcore fan of the melodic rock sound will have second (or even third) thoughts of buying it.

Highlight: In “Our Love”, there are guest members of Crazy Lixx, Casablanca, Reckless Love etc.