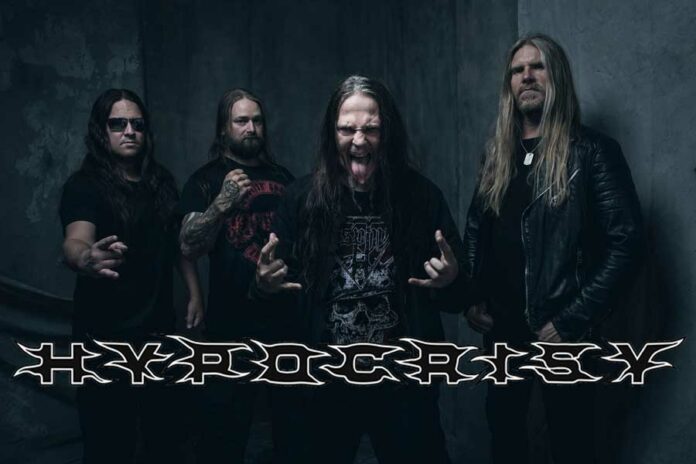 With a terrific new album in their quiver, last year’s “Worship”, Hypocrisy are coming to Greece and this is a good opportunity for a brief review of the career of this great band. And since it is not an easy thing to catch them on stage anymore, a concert like this for many of us cannot be missed.

Essentially the band started as a solo project of Peter Tägtgren during a period when he was living in the United States under the name Seditious. After returning to Sweden, he changed the name to Hypocrisy in 1991 and the rest of the members joined in 1992. Mikael Hedlund on bass (permanent member up to this day), Lars Szöke on drums, Masse Broberg (ex-Dark Funeral, ex-Witchery) on vocals and Jonas Österberg on the second guitar. The latter would only stay for a short time and the debut album “Penetralia” (1992) while after a year Broberg also left who participated in the recording of the second full-length “Osculum Obscenum”. Here Hypocrisy had nothing to do with their later career, since they played death metal with anti-Christian lyrics which was clearly influenced by the American scene, a result of Tägtgren’s stay there. These albums are considered classics for their genre and to this day their songs are included in the band’s setlist.

Continuing as a trio, a classic line-up that lasted for many years, Tägtgren, Hedlund and Szöke released “The Fourth Dimension” (1994) which was something of a transitional album. Basically death metal and with some melodies appearing for the first time and Tägtgren using brutal vocals, but it was almost exclusively mid-tempo. Something that differentiated it from the first two albums, which were characterized by a lot of blasting. The big success, however, came with the legendary “Abducted” (1996) that contained the super-classic “Roswell 47” that the oldest of you surely remember it in some of the dozens of collections that were published by print magazines. A turn towards melodic death metal, a change in the way Tägtgren sang as he went from brutal to screams, a change in the lyrics that now talked about aliens and science fiction and for the first time we also heard songs with completely clean vocals, something really rare in their discography. In the same year, their collaboration with guitarist Mathias Kamijo began as a session member for live shows that would last until 2004. The new Hypocrisy were here but did not last long, since in 1997 with “The Final Chapter” they announced their disbandment.

1998-2004: Reformation with amazing records and departure of Szöke

Fortunately for us, this chapter was not their last and the disbandment proved to be brief. Due to the immediate and great reaction of the band’s fans, it didn’t take them long to make the decision to continue. First release was the live CD/VHS (and later DVD) “Hypocrisy Destroys Wacken” (1999) from a 1998 appearance at the famous metal festival. In the same year, the sixth full-length “Hypocrisy” was released, while they did not delay at all for the next “Into The Abyss” (2000). The band’s melodic death metal is in a category by itself, since it doesn’t resemble other bands. Something that was about to change in their most controversial record, “Catch 22” (2002). The production completely outside of their sound, in an alternative/industrial style (perhaps influenced by Tägtgren’s other band, Pain?) and songs influenced by Slipknot and In Flames of “Clayman” among others. In the end it wasn’t such a bad album, which was shown in the remix/remaster released in 2008 with the title “Catch V2.0.08”, giving it a much better sound. Yes, there were some very weak songs but also some good moments. But we are definitely talking about their worst release. But the sequel was completely different, with the excellent “The Arrival” (2004) which contains another one of their…hits, “Eraser”. After that, however, Szöke leaves and thus the classic line-up of the band comes to an end.

His replacement was immediate and in his place came one of the best drummers in the history of extreme metal, the Norwegian Reidar “Horgh” Horghagen (ex-Immortal). Addition of a fourth member after a long time on second guitar, Andreas Holma (ex-Scar Symmetry) who only stayed for two years showing that the quartet does not work well on a permanent basis. “Virus” (2005) was excellent, showing Horgh’s formidable quality, but slowly Hypocrisy started to drop the frequency of their releases and concerts. It is characteristic that in thirteen years, from “Penetralia” to “Virus”, ten full-length albums were released, while from “A Taste Of Extreme Divinity” in 2009 to “Worship” in 2021, only three (in between there was “End Of Disclosure” of 2013)! They were on stage mainly to promote a new release, again using session guitarists like Klas Ideberg (Darkane, The Defaced), the immortal Alexi Laiho and from 2010 until now Tomas Elofsson, who we can also see on the second live CD/DVD, “Hell Over Sofia – 20 Years Of Chaos And Confusion” (2011). This year Horgh left in a friendly way after many years behind the drum kit, for whom a permanent replacement has not yet been found. On the current tour for this position they have the help of Henrik Axelsson (Implode, The Crown) and Peter Tägtgren son, Sebastian.

Finally, it is worth noting that Hypocrisy belong to a rare group of bands that have never changed labels, since they have been with Nuclear Blast for thirty consecutive years. A special band in the history of extreme music and specifically melodic death metal. With an instantly recognizable sound, with excellent albums along the way and a leader who is one of the biggest and most important figures in the Swedish (and not only) metal scene. Not only for Hypocrisy, Pain and the other bands he has been a part of but also for the countless productions he has done in huge and less known metal acts at the legendary The Abyss studio. Would we like him more active with Hypocrisy in recent years? Sure, but what should he do first? The important thing is that, even more sparsely, he continues to give us great works and allows us to enjoy him and his band on stage.