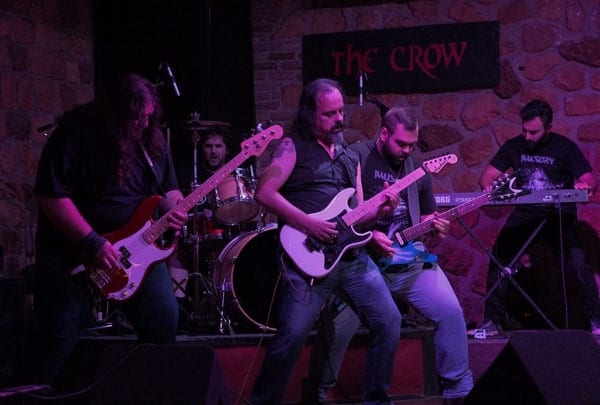 “Bleak” is the fourth video for Illusory, following “Dreamshade” (Official Music Video), “Odd-Y-Sea” (Official Lyric Video) and “Last Fallen Angel” (Official Audio Clip), essentially being the fifth single out of the “Polysyllabic” album – the band has also released “System’s Decay” as a digital single – which is available through retailers around the world as well as all popular streaming platforms. Shot, Produced and Directed by Alexander “Brain Gear” Orfanopoulos

Alexander Orfanopoulos and “Brain Gear” are well-known for various projects regarding video shooting, FX and color upgrading. He’s done the video and artistic part for events the likes of “Star Wars Day” and “Lord Of The Rings Day” and he is a true fan of ILLUSORY’s music. Collaboration in general was no less than excellent and the results speaks for itself.

Greg Bakos (Guitars) says: “We wanted a ‘simple’ sweat ‘n’ tears and total Metal video. The idea was in our heads from the very beginning and it took us just a bit to fulfill. I just love the way this video captures our energy on stage”.

George Konstantakelos (Keyboards) says: “The key factor of that video is our focusing on the song and our anxiety to perform as much as we can. ‘Bleak’ is a song which can be characterized as ‘In
your face’ and we wanted to maintain that all along the procedure. I’m just glad that Alexander made it happen”.

Niki Danos (Bass) says: “We are grateful to a bunch of people for this video. Apart from Alex, who’s been totally pro and a true Metal connoisseur in every aspect of this project, we would like to thank The Crow Club and its administration and personnel, who assisted us the best way they could. We do hope you like the video and we would love to see you in one of our upcoming gigs”.