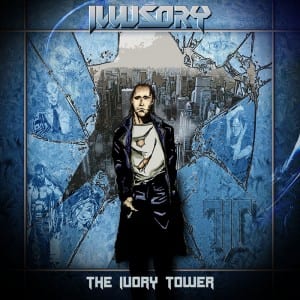 Illusory, the band name. The Ivory Tower, the album title. It could have been really the other way round but due to trademark reasons, legal rights and various other things, the guys had to change their name. Nevertheless, the titles are insignificant and those who know the work ethic of Illusory have already experienced the quality of the compositions. Especially, in the last 10 years or so they have become an integral part of the Greek metal scene and it was about time to listen to their first full length album.
Taking a good look at the cover and paying attention to the lyrics (although, I’d preferred to read them from the booklet), it’s safe to say that this is a concept album. I will have to revisit the album when I purchase the physical product but I am pretty certain that the key figure of the story has a lot of things to say. Musically speaking, “The Ivory Tower” revolves somewhere around the traditional heavy metal and the power/prog genre. The guys do not hide their admiration of Maiden and Queensryche while at points they reminded me of Kamelot (latter era). With such songs as “Anywhere” and “Society”, Illusory should definitely be proud and confident about an open wide future. That being said, I must underline a couple of points that need to be fixed. For instance, the vocals should definitely be improved…I don’t know how but it is an unavoidable necessity. In addition, I’d love to listen to a better production with more depth in the drum sound. But, that’s just my point of view.
We hold on to the excellent musicianship and compositional level of Illusory.
Highlight: A very professional job in regards with the press kit by The Leaders Records. It brought memories of past and better times.