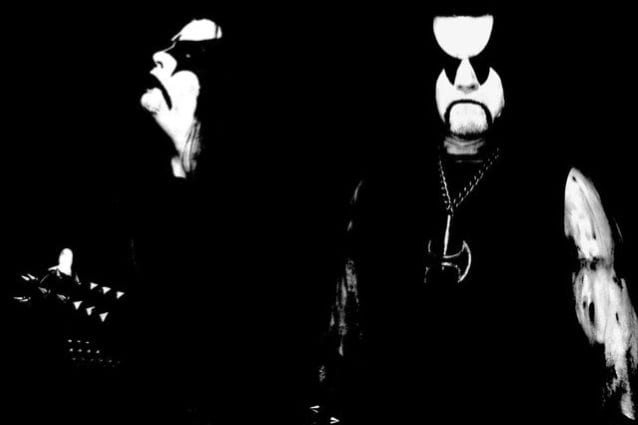 Norwegian black metallers IMMORTAL — now consisting of lyricist/guitarist Demonaz (real name Harald Nævdal) and drummer Horgh (real name Reidar Horghagen) — have completed work on their ninth studio album, to be released later in the year via Nuclear Blast. The disc was produced by Peter Tägtgren (Abyss Studio), who also helmed IMMORTAL’s “At The Heart Of Winter”, “Damned In Black”, “Sons Of Northern Darkness” and “All Shall Fall” LPs.
Demonaz and Horgh comment: “We have put a massive amount of energy into this, and wanted to deliver our absolutely best. It has been a pleasure to finish the studio process and most of all being stoked about the final result. Peter Tägtgren has done an outstanding job in producing and mixing it. We now look forward to have it released, and are excited to share our ninth full-length with you all.”
IMMORTAL’s new album will include the following tracks: “Northern Chaos Gods”, “Into Battle Ride”, “Gates To Blashyrkh”, “Grim And Dark”, “Called To Ice”, “Where Mountains Rise”, “Blacker Of Worlds” and “Mighty Ravendark”.