This is on of the most important people in our music for the last 20 years and there is no trace of exaggeration in that. We are talking about Nicke Andersson who begun as the drummer in Entombed created the Hellacopters and is now the leader of Imperial State Electric. Having created an entire movement with his music and aesthetics in European rock’n’roll, he contributed in various projects always following his muse, collaborating with true legends. We will have the chance to see him and Imperial State Electric live in a few days for two shows in Athens and Thessaloniki. Given the chance of these shows and before we go pay our respect to the man we talked with him about the band’s latest release, his glorious past and the forthcoming visit to Greece. Interview: Yiannis Dolas 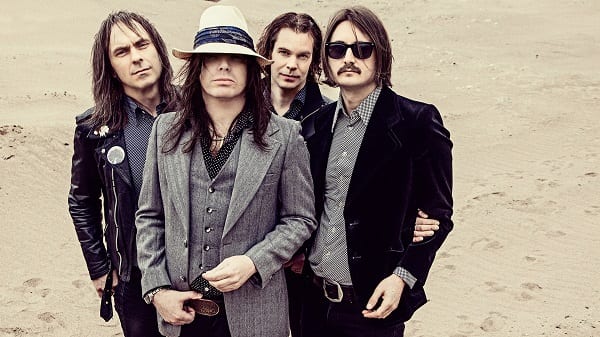 Rockpages.gr: “All Through The Night” I guess contains influences from all over the place from KISS to American country music, how can you make such a big variety come together in the same album?

Nicke Andersson: Everything I listen to inspires me and I guess I listen some different kinds of stuff. It’s all rock and roll to me though. Without blues, country and gospel you’d have no rock and roll so there you go. I don’t think about it too much. If it feels good then it’s good.

Rockpages.gr: My favorite songs from the album are “All Through The Night”, “Remove Your Doubt” and “Bad Timing”, can you tell us a bit about them please?

Nicke Andersson: I ’m glad you like them. “All Through The Night” is an older song of mine that was intended for a rhythm blues project I was part of for a very short while that never materialized. The other guys in Imperial State Electric said they really liked it when I played it to them so we decided to record it. “Remove Your Doubt” is drummer Tomas’ favourite song. I had that one for a little while too and Tomas have been very keen on recording that. I guess we should have listened to him because I think it turned out pretty good. We actually recorded “Bad Timing” for the “Honk Machine” album but me and Tobias got outvoted. However, on this album we insisted on including it.

Rockpages.gr: I think that “All Through The Night” could be your best album (so far), what do you think? How are you going to top it with your next one? Do you have any plans for that already?

Nicke Andersson: Thank you very much. Lots of plans and lots of songs ready. I have no idea if we’re gonna top it or not though, haha. We ’ll probably record it sometime this year.

Rockpages.gr: “Honk Machine” I think was more into The Beatles and psychedelia, what do you think and what was the difference in inspiration for that album?

Nicke Andersson: I don’t see or hear it like that at all to be honest. No difference in inspiration. Like I said earlier, anything and everything I listen to inspires me to write songs. 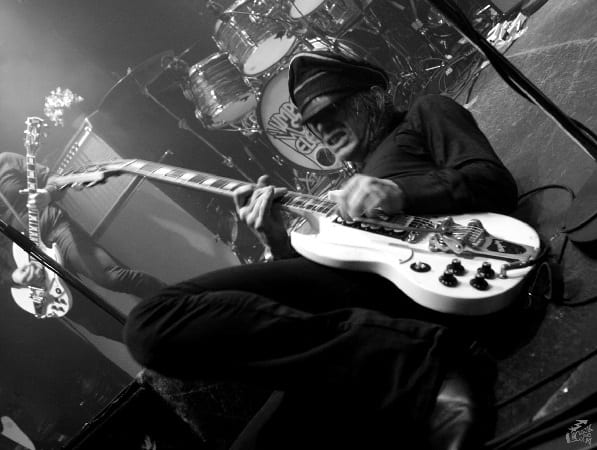 Rockpages.gr: Imperial State Electric released already 5 albums in almost 7 years and 2 EP’s. In a day and age that the record industry faces severe problems with piracy and downloading one would expect a different approach in releasing new music. What’s your view?

Nicke Andersson: It is what it is and there’s not much I can do about it. I follow my heart and reptile brain and that has been what we ’ve done. I like when bands don’t take forever to release a new album. More fun for the band and hopefully more fun for the fans.

Rockpages.gr: The Hellacopters were reunited for a couple of shows, do you think that there might be a chance for a new album?

Nicke Andersson: I ’ve learned to never say never so I won’t about a possible new album by The Hellacopters. As of today I just don’t know though.

Rockpages.gr: You started your career from playing drums in Entombed and then founded The Hellacopters where you played guitar and sung, can you tell us how this transition happened? Also, in case you haven’t noticed it’s very common nowadays for members of black / death metal bands have a different more rock ’n’ rolly kind of side project. Do you think you created a trend?

Nicke Andersson: No, I don’t think so. It’s probably more like people going back to what got them interested in music in the first place. I grew up on KISS, Sex Pistols, Ramones, Motorhead, etc and I don’t think that’s uncommon among people in black / death metal bands. 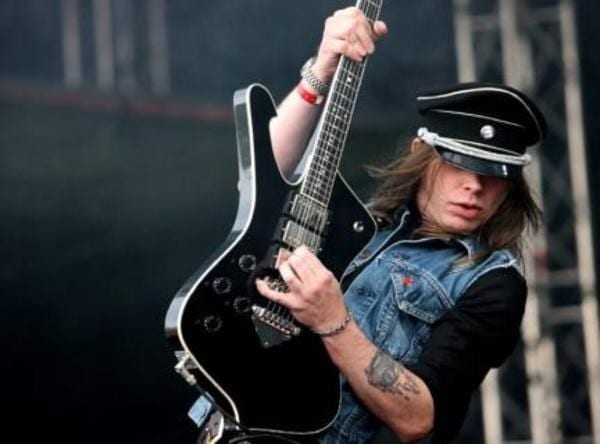 Rockpages.gr: Also a few months ago Robert “Strings” Dahlqvist passed away, can you share one or two memories of him when you were in the same band together?

Nicke Andersson: His passing is heartbreaking and he will forever be missed.

Rockpages.gr: You ’ve also worked with the legendary Scott Morgan on both Hydromatics and The Solution, can you tell us a bit about how this collaboration came up and if there is a future or plans for the release of new material?

Nicke Andersson: I think we hooked up via some friend of a friend thing. When we met Tony Slug from The Nitwitz in Holland we talked about our appreciation of Scott’s old band Sonic’s Rendez Vous and that some somehow got through to Scott and we met in New York the first time The Hellacopters were there and we recorded a song together, “Down Right Blue”. Then we got The Hydromatics together with Tony and did that. And a little later me and Scott started The Solution. He’s an amazing singer and guitar player and I ’d love to work with him again. Lack of time and that there’s an ocean between us doesn’t make it easy though.

Rockpages.gr: I guess a very important moment for you when you played with MC5 at their reunion shows in 2004 – 2005, can you please tell us a bit about it and how was it to play with a living legend like Wayne Kramer?

Nicke Andersson: It was an absolute pleasure and total fan boy heaven. I learned a lot and I have the deepest of respect for those guys. 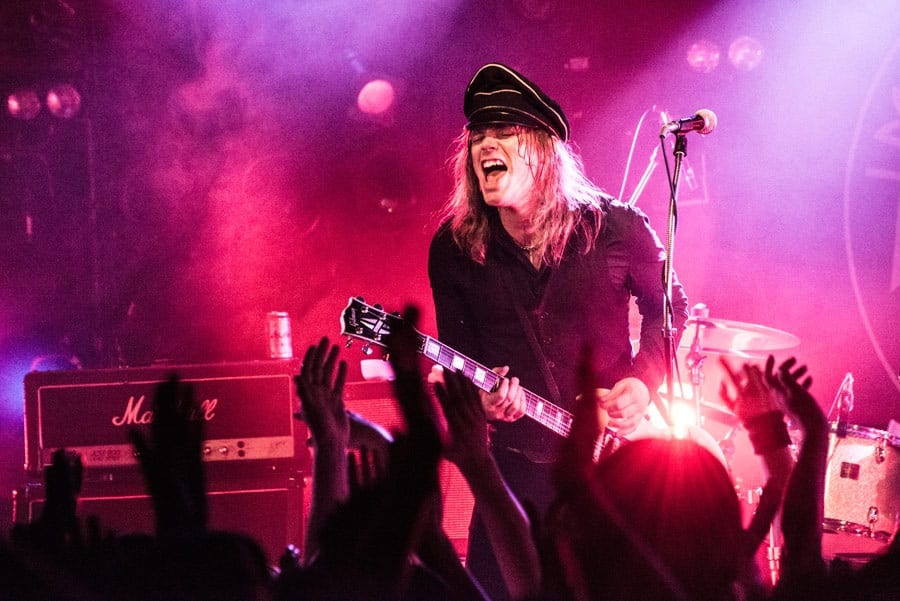 Rockpages.gr: Except from your own bands and projects you’ve been also working as a producer and mixer, can you tell us a few of your works that stand out so far?

Nicke Andersson: I haven’t done all that much but I enjoyed them all. I really like a Canadian band I produced called The Shanks. The Album is called “Prisons Of Ecstasy” and I highly recommend it.

Rockpages.gr: The Hellacopters have been praised by the media and was the spearhead of a movement with many followers, did you realize that at that moment?

Nicke Andersson: No, not at all. I think that’s just the way it works. When you ’re in it you really don’t think about it. Today I ’m just glad I was part of something like that and that some people will remember those times as good is a very cool feeling.

Rockpages.gr: A few days ago there’s been a terrorist attack in your country in the city capital, Stockholm. How do you think this will affect this huge cradle of heavy music that’s Sweden?

Nicke Andersson: It won’t affect anything which is exactly how it should be. Idiots don’t get to win.

Rockpages.gr: You are going to play in Greece for the first time, what’s your expectations from those shows and what’s your mentality when you are about to play in a place you have never played before?

Nicke Andersson: I ’m super excited to finally come and visit and play music in Greece. Since I haven’t been there yet I don’t have that much experience with Greek fans, but I ’ve only heard really good things from friends in bands who have been there. I ’m really looking forward to it. As far as expectations go, I try to have as little of them as possible. I try to keep an open mind and hope for the best. It usually works. We can’t wait to get there! 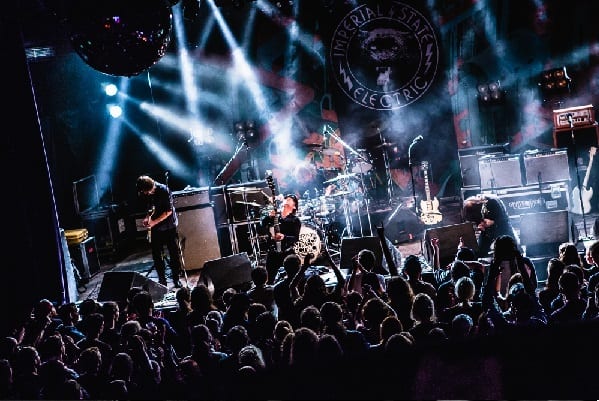