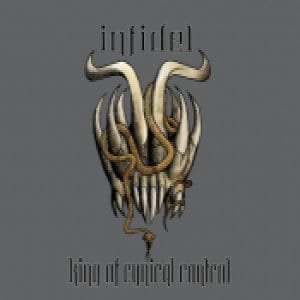 Infidel, the doom metal four piece from Athens has returned with the brand new second album “King Of Cynical Control”. The band is consisted of John Pousios on vocals, Manos Giakoumakis on  drums, Chris Kissadjekian on bass (also a member on What’s The Buzz?) and Dennis Kostopoulos on guitar (also a member on Acid Death). Basicaly, what we have here is doom metal with some fusion and Latin influences, which give a progressive colour to the final result.
In tolal the cd contains seven songs most of them of extra long duration. Six of them are originals written by the band, of modern doom metal sound with much Candlemass and Black Sabbath feeling, plus the fusion influence. It’s also very important to mention the good work on the album’s lyrics, which certainly give an extra credit to the songs.
There is also a surprise for the listener, the seventh song, contained here as a hidden track. It is an astonishing cover version of a famous electro-pop hit from the 80s! But, due to the band’s will to keep the surprise alive, we are not going to reveal the name of the song here. In fact, Infidel seem to be a very open minded band, since ‘King Of Cynical Control’ try to explore a new music path combining some different elements. So, definitely we talk about one of the most interesting cds of 2011.