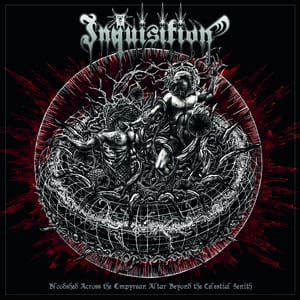 It’s the first time that I listen to Inquisition and I have to say that it’s enough to persuade me that it’s a special band. They were founded in Colombia back in 1998 by Dagon (guitars, bass, vocals) who moved there from the US, with the name Guillotina and played thrash metal. A few years later they changed name and location, because Dagon moved back in the states in 1996. He was searching for a drummer and found the perfect partner called Incubus. They are a stable duet ever since, with their new release being their 7th full-length.

Their music is characterized of cold, atmospheric black metal riffs who remind us of mother Norway, excellent drumming and very special vocals who match perfectly with their music. “Bloodshed…” is consisted mostly by fast songs with the addition of some mid-tempo dynamites like “A Black Aeon Shall Cleanse”, “The Flames Of Infinite Blackness Before Creation” and the self-titled instrumental. You may have figured out that they like long titles for their songs and albums, something that they do since their beginning and can easily be compared to Bal-Sagoth. Also, they have some unusual lyrical themes like Cosmology and Astrobiology. A very interesting band with a very interesting black metal album. The fans should check it out. “Bloodshed…” will be released in many different versions, including cassette, with various bonus stuff like patch and t-shirt.

For The Fans Of: Immortal, Mayhem

(Note: The album’s full title is: “Bloodshed Across The Empyrean Altar Beyond The Celestial Zenith”)