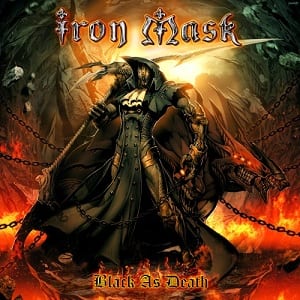 This band is actually the “other” band of the Belgian guitarist Dushan Petrossi, also known as the guitarist for Magic Kingdom. During the course of time the Iron Mask got ahead and, as we speak, they’re even more successful than the others, confirming their high quality by inking a deal with AFM. Petrossi is a proud dad once again… Huge vocalist Mark Boals is the lead singer on this one, whilst production and mixing were taken care by the mighty Denis Ward. Due to the fact that dream team is at large here… Could this album be any less than GREat?

Baroque compositions, epicus Malmsteenicus elements, barbaric beat and Boals dominates the mic. The band hybrid mixing with the deeds of the Swedish virtuoso along with the 70’s Rainbow rising… Superlative to say the least?

I don’t have a clue whether “Broken Hero” will be the first single; you can listen to it for free over the band’s official webpage, it’s an excellent hit, with a superb and catchy chorus, it’s a song small in duration and really bright… As for the rest of the songs, they are five, six and seven minute long masterpieces. Some ambient vocals and acoustic intermissions add to the “neoclassical” motif and Petrossi’s general style.

I’m sure that all fans of grand melodic music will love it… Yes, fans of Yngwie and Alcatrazz will love it, too.