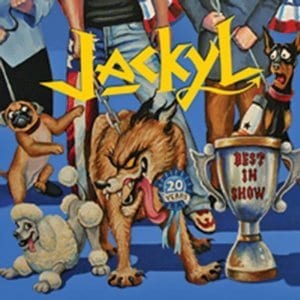 Seventh studio album is also a world record for the Americans. For the first time in the history of music, two bands, one featuring the father (Jesse James Dupree) and the other featuring the son (Nigel Thomas Dupree), are both releasing their brand new work on the same day. Father’s Day, July 31st. For those of you not that acquainted with the Georgia players, these guys are serving boogie boo and glam-ish striper-ish Rock. Their debut, back in 1992, was released via Geffen and got platinum in the US.
Dirty, greasy, full of innuendos, these Rockers fit perfectly! We suuuuuurely luvem! Party, high-class filth and “I wanna screw, driver”! Yeah, I know, the song title is different, however, don’t you think this is the song essence? Following track, “Horns up”, is in the same party-mode. Dirty riffing, grand mid-tempo drumming, autonomous bass and a voice filled with rough, tough and might! “Lord, show me some mercy, mama show me some more”. So, “journalists” listening to that stuff are gonna name the band’s music “Get some Metal”? Surreal, to say the least…
Yet, the band also presents a “voyage music parameter” and “Don’t lay down on me” is a typical sample of such a craft, the ideal escort for a long lorry drive, just like the Boss has prescribed.
There are two covers on this album. First one is “Cover of the Rolling Stone”, originally by Dr. Hook & The Medicine Show; a song parodying all those “hyper musicians” singing about beauty and truth for ten grand a show and number two… the real number TWO! “It’s tricky”, originally by Run DMC! Lights out NOW!

Jackyl have accomplished the following… They managed to play a hundred gigs within fifty days (!!!) and twenty one live shows inside a 24-hour thing!!!