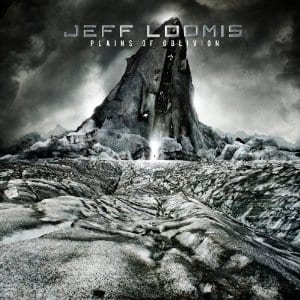 Jeff Loomis is not a stranger to the metal community. He is a well-known virtuoso and he became known for his exceptional style of play in the metal band Nevermore. In 2008 the heads behind Nevermore (Jeff Loomis, and Warrel Dane) released their solo albums. “Zero Order Phase” was the first album of mister Loomis which generally received good reviews but was a classic virtuoso album filled with great solos and technicality.
Four years later Jeff Loomis is no longer a member of Nevermore and he continues creating music this time with his second solo album “Plains of Oblivion”. In this album there are more guest musicians and even some songs that have vocals. The vocals in this album give the all-important variety.
There is no arguing about this man’s skill and technicality. He has once again created 10 songs filled with brutal riffs, great leads and intense solos. The problem is that in the 7 instrumental songs where there is little to no melody. At some points it felt like a competition of playing the most notes in a given time.
Some songs can be considered melancholic and others have neo-classical influences a la Symphony X. The 3 tracks that have vocals give the necessary break between the shredding tracks. Christine Rhoades has a beautiful voice and suits the guitar play of mister Loomis. Also the song “Surrender” features Ihsahn from Emperor and it’s easily the best track in the album. Loomis’s play style suits the black vocals and in this album both black and clean vocals are excellent and the riffs are amazing.
Generally, I find this album a little bit better than “Zero Order Phase” just because of the neo classical influences and the non-instrumental songs which were non present in the first album. But the complaint remains. We know that mister Loomis can handle his guitar excellently, but I would like to hear more melodiousness from him. Maybe this will be the last pebble to create a perfect album.