The interview with Joel Hoesktra has been arranged for 11:00 in the morning at the hotel where Whitesnake was staying in Dublin. Unfortunately, the Desmond Storm that hit Ireland and the East Coast of England the previous night resulted in an adventurous trip for Joel on a ferryboat from England to Ireland. Nevertheless and despite the fact that the ever smiling guitarist had only a couple of hours to sleep, Joel was very kind, in a good mood and gave us some very genuine answers in regards with his solo album, Whitesnake, Night Ranger etc. Interview: Sakis Nikas

Rockpages.gr: Joel, I am sure by now you are aware of the positive feedback that your solo album has received. Did you expect such a positive reaction by the fans and the press? 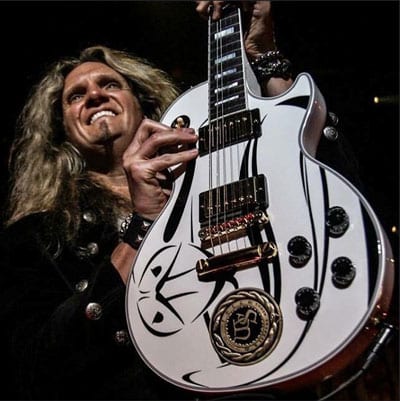 Joel Hoekstra: I am not sure that all the people who gave it a listen liked the album but I feel like most of them really enjoyed it. I feel really good about the record…I got some pretty exciting reviews…yeah, it feels great. It was a labor of love for me doing this album. It really was. I put my heart and soul into it because I wanted to make something really special for the fans. I appreciate the fact that people dedicate some of their time to listen to the album and I hoped more people will get to listen to it in the future.

Rockpages.gr: Most of the fans know that you are a great guitarist and songwriter but most of us didn’t know that you are also a skillful producer. How come you decide to produce the album yourself…did you want to have complete control over the whole thing?

Joel Hoekstra: Yeah, I think so. Not necessarily a “control thing” but mainly about being able…well, cone to think about it, you are right…you can say that it was a “control thing” (laughs)! I love working with outside producers…I really do. But this time, I needed to do this on my own. It was kinda fun to be the person who made the ultimate calls on all things.

Rockpages.gr: Was it an easy task for you?

Joel Hoekstra: Yeah, I think so. Like I said, I enjoy working with other people but it makes things easier when you are the one who makes all the final decisions about your album.

Rockpages.gr: Jeff Scott Soto and Russell Allen handle the lead vocals. I know that you have worked in the past with Jeff…how did you end up collaborating with Russell?

Joel Hoekstra: Russell is a great singer…you know that. He had signed up to do the Trans-Siberian Orchestra Tour and I had the chance to check him out because at the time I was looking out for a singer. Honestly, I haven’t listened to Symphony X in the past and I was really impressed when I heard the guy singing.

Rockpages.gr: Was there any thought of using any other singer, I mean apart from those two guys?

Joel Hoekstra: Yeah, there were a couple of people that I was interested in working with…I wouldn’t name them of course but there were some other options for me. Ultimately, I am really happy with the singing on the album…I got to have two of the best singers in rock nowadays so I couldn’t be happier. 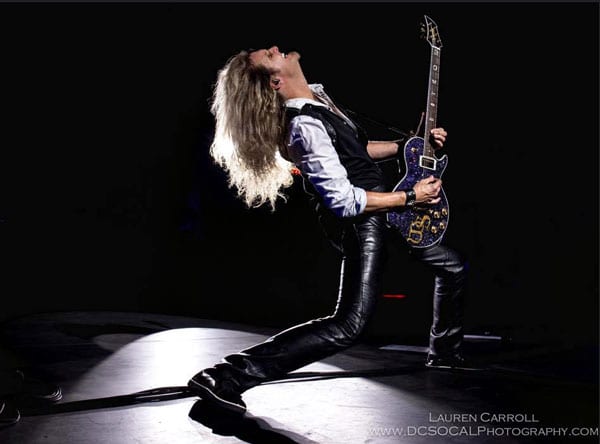 Rockpages.gr: “Dying To Live” is actually your fourth solo endeavor although the three previous ones had little to do with rock music. Would you say that “13” is your rock side project? 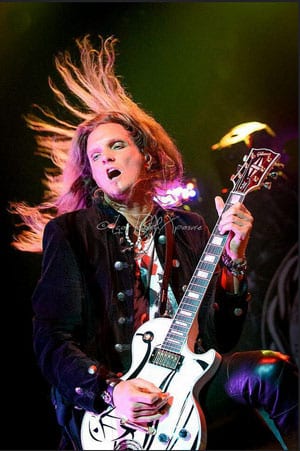 Joel Hoekstra: Yeah, I guess you can say that. That’s exactly right. The first three records were my solo efforts…with this one; it was a bit of a dilemma of how to call the whole thing because to me it sounds like a band and if I called it simply “Joel Hoekstra” it would be a little bit deceptive as people would have probably expected something like an instrumental album or guitar work…something like that. At the same time, it wasn’t really a band because as you said, I did all the writing, the production and it’s very much my album. But ultimately I believe that “Joel Hoekstra’s 13” is a pretty good name for a side rock project.

Joel Hoekstra: (laughs) Well, Reb has been in Whitesnake for such a long time…he is a great guitarist and person. So, when I heard that there was an opening for Whitesnake, I thought that it was too good opportunity to pass up…the very least I could do is to look into it. Whitesnake is a great guitar gig with amazing solos and David is a rock royalty. The line-up is fabulous…Tommy Aldridge is every night on fire behind the drums. I have a great working relationship with Reb…we are a good team. For me it’s a great opportunity and I am trying to make the most of it.

Rockpages.gr: I was talking a few months ago with Jack, Brad and Kelly from Night Ranger and these guys had only the best things to say about you. How would you describe the overall experience with Night Ranger?

Joel Hoekstra: I learned from them more things about the whole industry than I had with anyone in the past. They are such professional musicians. I spent seven years with those guys; we made two great studio albums, one great live acoustic record and we played hundreds of shows. I love those guys…they will always be my brothers. I still talk with Brad all the time and yeah…I have nothing but the best words to describe my whole experience with Night Ranger.

Rockpages.gr: When you joined Whitesnake, did you think that it was one step up in your career?

Joel Hoekstra: Well…yeah but it was also time to do something different. As I said, I was in Night Ranger for seven years and this gig with Whitesnake allows me to travel overseas and do more international shows because Night Ranger didn’t tour so much in Europe or South America. So, this gives me an opportunity to expand a little bit.

Rockpages.gr: Up until the Night Ranger gig, you were mostly a session guitarist. How do you feel now that you are a regular member of a band? Is it a better situation for you?

Joel Hoekstra: I don’t really know the answer to that one…I am just trying to do the best I can and accomplish as much as I can as a professional musician. I mean, in a lot of ways Whitesnake is a band and David is very gracious in that aspect…so were the Night Ranger guys. At the same time, it’s really my job to make David happy in Whitesnake. So, I do try and treat it as a job…so I still feel like a session guy in a lot of ways… 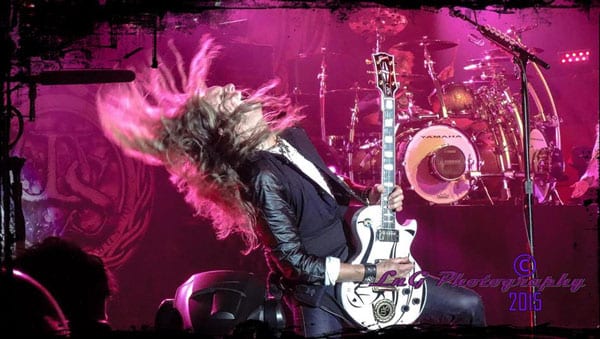 Joel Hoekstra: Exactly! There is nothing wrong of being a working musician. Sometimes people use the term “working musician” in a derogatory way but it’s so hard nowadays to make a living in the music business. Personally, I am honored to have 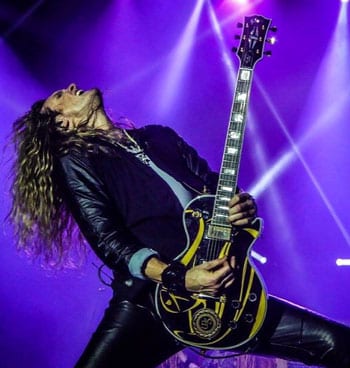 the opportunity of doing this professionally and it’s not such a bad life for me…you get paid to travel the world and play guitar.

Rockpages.gr: Your first album with Whitesnake is a tribute to Deep Purple. Were you a fan of Deep Purple as a teenager?

Joel Hoekstra: Just very slightly. Of course, I knew all the hits and I always had the biggest respect for Ritchie Blackmore…an amazing guitarist and a rock icon. He is still playing fantastic. But in terms of being a huge Deep Purple fan…no, I wasn’t.

Rockpages.gr: How did you divide your guitar duties with Reb?
Joel Hoekstra: Most of the stuff was already in place as Reb handled it…he was also the co-producer of the album. Most people don’t realize that it was a creative process and it wasn’t simply a tribute album. As you know, the original version of the songs had only one guitar. Reb had already covered that and I was left with the task of coming up with guitar patterns that would be suitable if the original versions had a second guitar on. I also tried to come up with sounds and textures that would make the album more complete and whole. For example, I tried slide guitar on “Might Just Take Your Life”, the tapping thing on “Lay Down Stay Down”, the talk box on “The Gypsy”, the acoustic stuff on “Holy Man” and David Coverdale turned over to me the acoustic arrangements of “Soldier of Fortune” and “Sail Away”. So, despite the fact that we were making an album…recording pre-existing songs, we all felt that it was a creative process. I was very prepared when I entered the studio because for three weeks in a row I only listened to those Deep Purple songs and I got very familiar with them…I knew them inside out.

Rockpages.gr: Well, you knew the hits as a teenager…I guess you were more familiar with the MK II line up with Ian Gillan and Roger Glover…

Joel Hoekstra: You are right…songs like “Smoke On The Water”, “Highway Star”, “Child In Time”…these are classic rock songs.

Rockpages.gr: Are there any plans of recording a Whitesnake album with original material?

Joel Hoekstra: Well, I’ll let David answer that…I know for a fact that he is very enthused with this line-up and I am sure that he wants to continue with Whitesnake for a few more years. 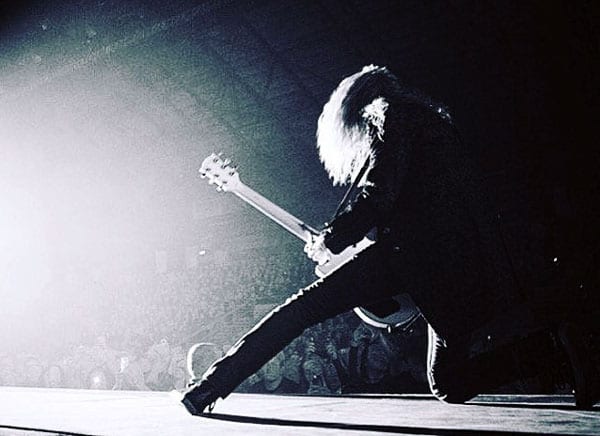