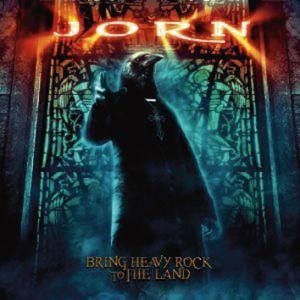 Why are you torturing us, Jorn…and most importantly, why are you torturing yourself? Isn’t it a fine job being Masterplan’s lead singer? Once again, this really talented vocalist fails to deliver something remarkable on his own. Trying to record a heavy rock album –as it is so prominently stated in the title- a good level of composition and inspiration are required. Unfortunately none of those two elements can be found on “Bring Heavy Rock To The Land”. Come to think about it, if we take aside Jorn’s first solo venture (“Starfire”) everything else pales in comparison. In addition, Jorn is pushing himself really hard to sound like a clone of Dio, Coverdale and Turner and this is something that the singer should work on because it’s definitely not the best thing in the world to sound like an imitator of these established vocalists. On a side note, I must underline that his backing band has done absolutely nothing in improving their performance and skill qualities.
Jorn’s attempt of covering the classic “Ride Like The Wind” fails to sign on the record, especially due to the fact that the Norwegian singer is actually redoing Saxon’s and not Christopher Cross’ version. Also, the song “Chains Around You” is a copycat tune of Rainbow’s “Spotlight Kid”. And if all these weren’t enough, Jorn is doing yet another mistake by reworking on one of his own tracks, “Time To Be King”, that he released under the Masterplan moniquer a couple of years ago. Some may argue that he has every right to do so, but in my humble opinion, he only shows lack of seriousness.
As you can easily gather, I cannot suggest the purchase of this album, but I can definitely suggest to Jorn to focus on Masterplan.