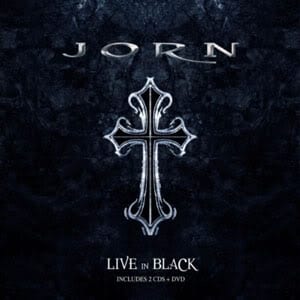 Well, the time has come for Jorn’s first live album that captures the Norwegian’s solo performance in Sweden Rock Festival on the 10th of June 2010. The record is called “Live in Black” and generally speaking it’s a good yet typical offering. Jorn’s band is flawless and puts on a tight and well worked performance. As for the songs that Jorn chose for that evening’s set-list, I reserve the right of objecting to the selection. He neglected such songs as “Starfire” and “Out To Every Nation” and he focused mainly on his latest studio opus, “Spirit in Black”. The album doesn’t include any other songs from Jorn’s parallel projects but it offers a cool rendition of Thin Lizzy’s “Are You Ready”. Overall, this is a concert that you really enjoyed listening to it but at no point does it manages to drive you crazy by the sheer listening pleasure.
This double release is accompanied by a DVD that visually captures the same concert but the camera views are really bad and I really can explain how they turned out to be so dark under the bright sunshine! A few excerpts of the concert are also depicted in B&W. In the extras section we get to find the video-clips for the tribute song to Dio (“Song For Ronnie James”)…we have already shared our point of view in the past with you and “Man of the Dark”.
I am still waiting for Jorn’s strategic move which will allow him to go to a higher level…but I strongly believe that this will come only via Masterplan.