After a stroke of bad luck and unfortunate incidents a few hours before the interview, we finally found our way to the backstage area where Judas Priest is relaxing before yet another bombastic show that would leave all the Greek metalheads speechless and in awe! In a secluded press room, we set the equipment while Judas Priest’s axemen, Glen Tipton & Richie Faulkner, are making their entrance. Lights, Camera…Judas Priest! Interview: Sakis Nikas / Camera: Yannis Dolas

Rockpages.gr: Your latest album “Redeemer of Souls” is already considered a Judas Priest classic album. How do you do it?

Glenn Tipton: Well, I think historically through the band’s career, no one in the band has ever wanted to do an album with weak songs on it; we discarded them. So, it’s gonna be the best thing we could do…I enjoy listening to the songs and consider playing them on stage. “Redeemer…” is exactly the same thing except of course that Richie came into the band; we didn’t know how it’s gonna work out at all but it couldn’t have worked out any better! Richie fitted in to the writing…we did a few songs…we used some of them and some others not. I think the fact that you got someone new in the band is like…he presents a new idea to me which I thought is better than mine and it probably is. I am always interested in working with someone else’s stuff than my own thing. I think everybody is like that in a way. To make a long story short, we knew we gotta come out good with this album. It was a big hurdle to cross…we knew we could do it live…we’d done the Epitaph tour with songs from every album of ours and that turned out really good. The writing was another thing but everything worked great and once again we got a classic album on our hands and we didn’t know if we could do it again but we did! Richie has injected us with some of his enthusiasm and we are ready to go out and play the songs again. I think, just to sum up, everybody in the band just loves heavy metal, loves to play Judas Priest music; it’s a genuine love…it’s not enforced or façade. It’s something we love to do!

Richie Faulkner: I think it’s interesting…classic, for me, can be so many different things. It could be a “classic sound” or a “classic album” that has been out for 30 years. It could sound as classic but it might not have the time to become a classic album. It could be so many different things to different people. But I think that a band like Priest with a character like Priest…you got 5 guys in the band and they have been doing this for more than 40 years; I think the character is so strong and what we wanted to do when we went into the studio for “Redeemer…” we just did what came out naturally. These guys have been doing it from the heart naturally for 40 years; I’ve been brought up on the band as far as I can remember so I think when you do it from the heart and you have such a strong character, it’s got that classic quality that Judas Priest fans can associate with. Obviously, over time it can become a classic in those terms but I think that the sound of it is a Judas Priest classic sound because it came out from everybody’s heart, you know…

Glenn Tipton: No, not all. There were three things…if you call yourself a guitar player…there are probably more than three…you must never forget the image, the exciting playing, you gotta be a lead player, a rhythm player, you got showmanship but you also must be able to write. Then, I think, you can call yourself a complete guitar player. There are great guitar players but not complete guitar players. When Richie walked through the door the most important thing is that we got along. It’s not good when you have somebody in the band that you don’t get along or you argue or…you know, you don’t like. He was immediately likeable and we became instantly great friends. In the live aspect of the whole thing, Richie was…it couldn’t be any better. It was a miracle really. When these obstacles were over and done with, I had already confidence that Richie would bring things to the table on a writing level that were appropriate and exciting and that’s exactly what he did. So, I was never nervous in that aspect as he had already proved himself on stage; we already knew each other. It was such an enjoyable process to write this time, you know…it was great!

Rockpages.gr: How about you, Richie…? How did you feel?

Richie Faulkner: Well again, as Glen said, we spent the best part of two years on the Epitaph 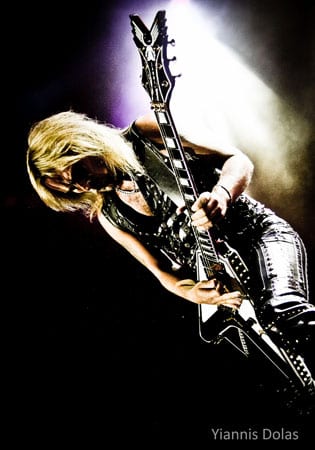 Tour and we built up camaraderie; a friendship and we spent a lot of time with each other. Plus, you are playing two and half hours worth of songs every night from 40 years (of career). So, I think it all goes in and as I said before I grew up with bands like Priest, Sabbath and Maiden…that twin guitar type of thing…obviously not Sabbath but bands like Thin Lizzy, you know. It was kind of…it was all in there and as Glen said, by the time we went into the studio there wasn’t any nervousness if it’s gonna work. I mean, you are injecting that music every night. Every night might be slightly different…we might play something different. But we are always doing the twin guitar playing and we seemed to lock in. By the time we went into the studio, we were friends; we had built up a relationship. If you’ve got an opinion, you ask the others, you get asked and it’s valued. We don’t agree all the times but you know that your pinion will be valued. If something could be better, I could say it to you and try to get it better, you know what I mean…rather than being afraid and not say anything. Because of all the experience in the Epitaph Tour and the building of the relationship, it was really natural to sit down and do exactly what came from the heart; put some ideas in the table and see what stuck. I think that it’s brain creativity.

Rockpages.gr: Judas Priest has been around for 40 years and we can say that you approach the end of your career. Ian Hill said that there is a possibility of doing one last studio album…

Glenn Tipton: I think there is a good chance of doing one more album. We can never say what’s around the corner; nobody is sure of what’s gonna happen but I think it’s pretty safe to say that we can do another album. Of course we must do a better “Redeemer…”, you know…if we don’t do it, then people are gonna say that it’s a crap album. It’s a bit of a challenge there but we had always risen to challenges…I think there is another album in us.

Rockpages.gr: I am sure you know that Greece faces some harsh financial problems. I believe that England faced some similar problems in the late 70s/early 80s, too. What’s your message to the Greek fans and do these problems inspire you to write music from the heart?

Glenn Tipton: It might do…yeah. I understand what the Greek people are going through. Concert tickets are not cheap. All these kids struggle to buy those tickets and go out and see the show. We are gonna play our hearts out for them because they deserve it. It’s difficult enough in this world as it is but if you have financial problems as well…the younger kids…it’s difficult to buy tickets and we appreciate it. We were also given the chance to come or not come but there was never any doubt in our minds. We always wanted to come to Greece and we want to play for the kids. They wanna see Judas Priest and we wanna play for them. There was never any doubt really.

Richie Faulkner: I think it’s a good release…there will always be problems whether they are on a national scale or global scale or a personal scale. I think it’s a kind of release. We are fans of music, we’ve been to concerts before and you kinda leave your problems outside and you can release that stress and tension with your family! Because it is a big family…there is a few thousand people out there…so I think whatever’s going on in your life or in politics or whatever, such events are essential because otherwise you pile everything up inside. We are all in this together and I think that such release is a positive thing.

Glenn Tipton: I think to a certain extent we have adapted to the term “defenders of the faith”, “defenders of heavy metal”…I think that heavy metal will never die. The spine of heavy metal is there…you got death metal even punk and New Wave stem from metal and you can learn from everything. You can write a great song from three chords and it’s the energy that matters; you can step on the gas a little bit. There will always be a Zeppelin type of band or a Rolling Stones type of band but I think that we have a fantastic luck to get this amalgamation of certain talents that strike chord and write great songs. They will always emerge…I know what you are saying when Priest, Sabbath, Purple go…other bands will fill in their footsteps, you know…it’s difficult now for bands to earn longevity; to be around a long time. They release one, two great albums and then they split up for various reasons.