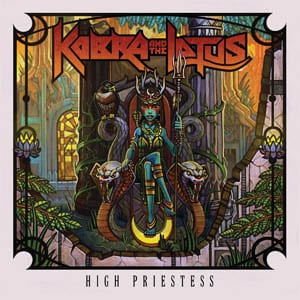 The new album of Kobra Page and her band is as good as the previous ones. “High Priestess” is a very important progress for the Canadians, which become established into the metal scene in an extremely fast rate.

The album is nothing but pure metal with riffs. Despite the fact that it reminds of the classic periods of Iron Maiden and Judas Priest, and the vocals remind of the outstanding Doro Pesch, they present a remarkable album with very good compositions, filled with energy and capable of becoming accepted by all the fans of metal.

The speed here is high enough, the solos are almost “relentless”, just like the vocals of Kobra. The production of Johnny K. (Disturbed, Machine Head, Megadeth, 3 Doors Down, Enuff Z ‘Nuff, etc.) is very good and absolutely right, and gives the album the necessary tone quality in order these old school influences to sound more… modern.
The top moments of High Priestess” are the “Heartbeat”, “Hold On”, Soldier” and “Battle Of Wrath”, and with a second thought, almost half of the album…

Kobra And The Lotus will probably cause quite a stir with this release. Already in the USA some thousands of people have seen them live, as during the summer they were the support band in the tour of Kiss and Def Leppard, something which was to no extent accidentally.

Kobra And The Lotus | Kobra Paige