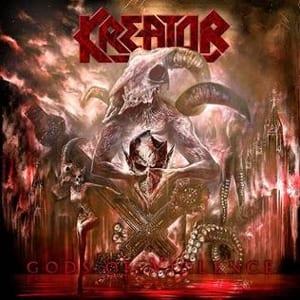 The Kreator has returned, as Mille Petrozza states in each live performance. Almost five years after “Phantom Antichrist”, their 14th studio album is being released. An album that confirms our predictions of being even more melodic than its predecessor. It is after all their more melodic work after the great comeback with “Violent Revolution”.

Having listened to “Gods Of Violence” a bunch of times, I can easily say that it didn’t impress me. It has of course some great moments, especially “Totalitarian Terror” and the self-titled are songs that you just know they will never leave Kreator’s setlist, but in general it didn’t satisfy me. Melody and lyricism are key elements to their music, something that escalates from the middle of the album, despite the effort of Mille to scream as much as he can and Ventor to blast like a maniac. Songs like “Hail To The Hordes”, “Lion With Eagle Wings” and the seven minute long last track “Death Becomes My Light” could be described as power metal if they had different vocals. Not that I have a problem with extreme bands that use a lot of melody, I like seeing musicians trying different things in their sound. But in Kreator something doesn’t fit for me. Nevertheless, these are now the Germans and this is their style. They evolve and are being rewarded with many tours and an on growing fanbase. If you like that, the new album will give you what you want. The rest of you, as myself, will forget about it soon.

“Gods Of Violence” comes in many different versions for every taste and pocket that include CDs, vinyls, cassette, DVD and Blu-ray in many different combinations. It includes their appearance in Wacken Open Air 2014 (meaningless, since “Dying Alive” of 2013 is out there with the exact same setlist) and a CD with five tracks of the album in demo version that are really nothing special. A bonus tracks only exists in the Japanese Version.