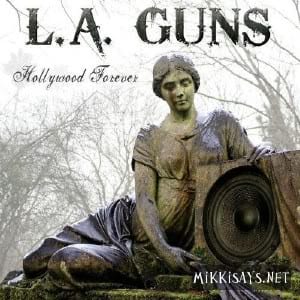 The name and fame of L.A. Guns has definitely endured many tarnishing hits over the years as the legal battle rages on between Tracii Guns and Phil Lewis regarding the rightful use of the band’s name. Nevertheless, the true fans of L.A. Guns know that there is only one legitimate version of the American outfit: the one fronted by Phil Lewis.
“Hollywood Forever” is a magnificent records that combines all the trademark sleaze rock n’ roll elements with the ever characteristic voice of Lewis. The compositions themselves are brilliantly crafted and well-performed in the studio despite the fact that they don’t match the 80’s heyday with all those classic moments. As a matter of fact, “Hollywood Forever” brought in mind the three last studio albums by Phil Lewis and Co. The best moment on the album is by far the title track and “You Better Not Love Me”. There is also a Spanish(!) track in there that I kinda liked its melody but I didn’t understand a single word apart from the title (“Arana Negra”…Black Spider, that is). “Hollywood Forever” or even better…L.A. Guns Forever! A great album!
Highlight: I am still trying to forget the abominable show of Tracii Guns’ L.A. Guns 5 or so years back, here in Greece.