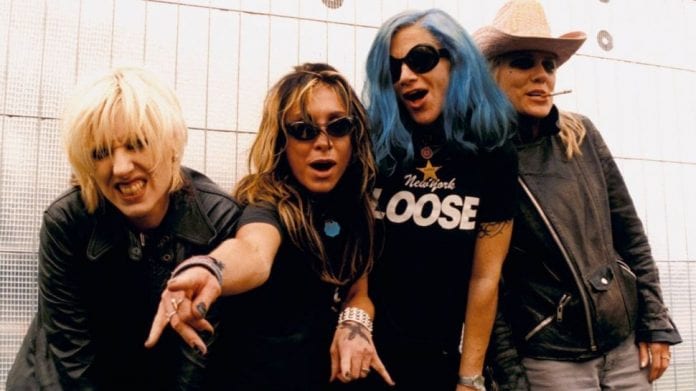 L7 are planning to release their first album in almost 20 years. The San Francisco band announced the news via crowd-funding site PledgeMusic.
“We’ve had such a blast hanging out, writing, and recording with each other again that we decided to keep the ball rolling,” said the band on their PledgeMusic page. “More song ideas have been flowing out of us every time we get together and play, so we’ve decided to make a full length album which we will record this year.”
The band are yet to announce a title or release date for the album, their first since 1999’s Slap-Happy, but they are also offering signed set-lists, drum heads and drumsticks, meet and greets, plus guitarits Suzi Gardner’s red Gibson Les Paul on their PledgeMusic page.
L7 rose to fame in the early 90s with singles Pretend You’re Dead and Everglade, and the 1992 album Bricks Are Heavy. They split up in 2001 but reunited in 2015 for a comeback tour, released a one-off single, the Donald Trump-baiting Dispatch From Mar-a-Lago, in 2017, and teaser single I Came Back To Bitch earlier this year.