This was the festival’s third instalment which found it stronger than ever, since it was happening at the same time in two cities, Athens and Thessaloniki, a very smart move from Angels PR Music Promotion. We were in Athens, which like the previous time took place at Holywood Stage. The concept was the same as last year with five female fronted metal bands coming from various genres (which is something that proves how much unfair is the tag “female fronted”). The fact that the festival coincided with Women’s day gave an extra something to a night filled with melodies where everyone found something for his or her likings.

Mute Tale, a symphonic metal band from Athens which combines atmospherical as well as melodic folk touches and power metal, kicked off the event with “Realm Of Serenity” who set the mood from early on. Annou was the driving force as they performed their material, which was mostly songs from “The Gordian Knot”, during their 30-minute set. Their stage presence was decent with a second female voice, a cello and it was the ideal beginning for this year’s festival.

Up next were Julian’s Lullaby who play move into more heavy power paths with Anna and Giorgos overlapping their voices in a nice “battle” that ended up in a bouquet of flowers. Their sound was good and they played songs mostly from “Prisoner Of Emotion” (20170, without neglecting “Dreaming Our Fears” (2011).

“Life is just a warm embrace…”

Disillussive Play followed with singer Antigoni having the time of her life on stage and with her grainy voice attracting the attention while their hard’n’heavy songs was the perfect match for our drinks, even though they had some technical isssues which jeopardized their performance for a little while. I think they play tighter this year and they are ready to open the show for Symphony X in Israel in a few weeks. Although they had enough material to play a full set of originals they added “Midnight Over”, which was redundant in my opinion, as well as the all time classic power ballad, “Sleeping In The Fire”, which closed their set. Our favourite “Her Lonely Mind” was there too, so everything was OK!

setlist: white dove / alpha / in the blink of a life / open arms / watered soil / steeling you away / midnight mover(ACCEPT) / the dreamer / her lonely mind / sleeping in the fire(WASP)

“I am my own illusion / I thrive in my delusion …”

Those who haven’t heard Afterblood before found themselves in a shock. I saw heads turning and getting into headbanging mode right away. Powerful death/thrash with the right groove and an explosive Hel Pyre on lead vocals was a great package and treated with enthusiasm from the audience. They also included Celtic Frost’s “Procreation Of The Wicked” and had Iliana Tsakiraki (enemy Of Reality), who celebrated her birthday, as a guest doing a duet on “Enemy In Me”. After that all the ladies came up on stage with smiles, kisses and wishes making us forget all about Covid19 even for a while.

setlist:intro/saw / terror in somnum / behold the fallen / breathe chaos / no shadows in the dark / before time runs out / fragmented balance / worship blood / deathlike silence / procreation of the wicked(Celtic Frost cover) / enemy in me (ft.Iliana Tsakiraki)

“Threatening to tear the veil asunder…”

Dimlight was the surprise of the previous festival and rightfully took the headliners’ position this year. The audience though was unfair to them as there was a lot of people who left right after Afterblood. That was their loss of course, because they missed a great performance of a band that gives everything it got both on and off stage to deliver something unique and outside the ordinary. Their style could be generally described as symphonic death metal (but they are much more than that) with dual vocals between the always impressive Mora doing the clean ones and Invoker who handles the brutal ones. Jim was amazing on drums and the band was on fire playing its stuff furiously with the lion’s share coming from “Kingdom Of Horrors”, accompanied by bits of “The Lost Chapters”. Good job!

Setlist: fields of carnage / invoking the hunter / beryl eyes / shattered idols / beyond the gates of horror / torrents of blood / clash of immortals / lais animae / we the bones / red king / beyond death’s icy grip 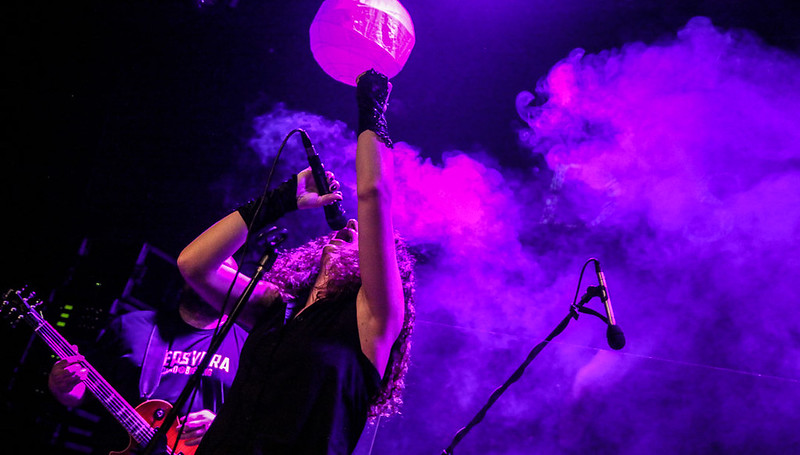