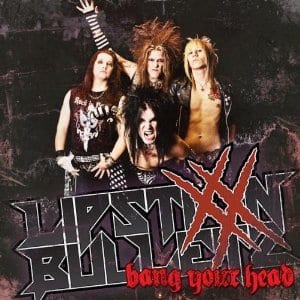 With each band member bearing a nickname based on lipstick and gunfire (like a tribute to ‘Guns and Roses’), Lipstixx N Bullets are considered to be one of the uprising acts of the Swedish scene.
Two demos in 2006 (one year after the band was formed), followed by a powerful official debut in the Sleaze-Glam Rock scene in 2009, did not have the desirable critical acclaim.
They weren’t in the mood to give up though, and got even with a surprise release. In 2009’s ‘Bang Ur Head’ (with the album title and the production clearly inspired by the band Quiet Riot), Andy Lipstixx (guitars/vocals) attempts to remind us of the rock’n’roll 80’s, as he acts as a more hardcore version of Michael Monroe, with several parts of the album carrying a Motley Crue feeling.
What he delivers, is four instant hit songs that are hard to overlook but also not instant classics. ‘Bang Ur Head’, “Lipstixx N Bullets”. “Do or Die”, “Scream it Hard”, are songs that could fit in any sleaze compilation, but would under no circumstances top classic songs of Crazy Lixx or Crashdiet, for instance. Later on in the album, the tone becomes more erotic and ballad-like, as noticed in “My Hear Belongs to You” and its melodic backing vocals and a touching chorus. Following, “Love in a Needle” forces as to bring “Heroin Diaries” to mind, but clearly fails in comparison. I have a feeling that the song is written more to make a reference to drugs mostly in an ideological manner, and not because the feeling was there. I would not know what goes on in their studio sessions of course, but such an impression of mine does not help encouraging the effort…
With Rikki Bullet’s (guitars) contribution, “Wild at Hard” also belongs to the hit list of the album, but even though the composer differs, cannot do justice to the songs they are obviously attempting to rip off. Maybe in their next release they have a surprise for us, but for now it wouldn’t do you any harm checking them out, especially if you are a faithull fan of the New Swedish Sleaze scene!