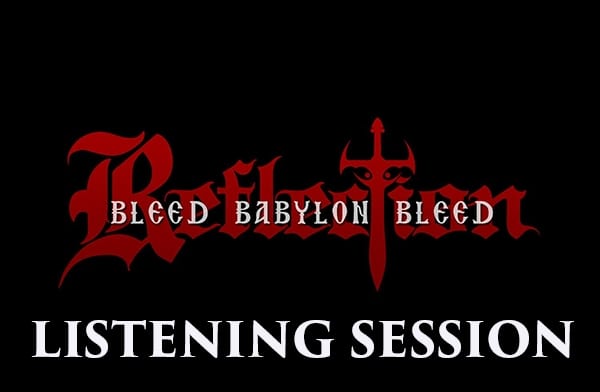 Rockpages.gr could never ignore a call addressed by the Athenian metal band Reflection and on Saturday, January 21st, was present in the Music House Studios for the listening session of the much anticipated Bleed Babylon Bleed album.

9 years passed since the previous one titled When Shadows Fall. Years that included lineup changes, financial difficulties and more recently a very serious health problem concerning the band leader Stathis Pavlantis. Eventually Stathis emerged victorious from his ordeal and with all the Greek heavy metal press present, celebrated the unveiling of a brainchild that despite all the delays is very likely destined to become a milestone in the career of the band. Let’s move on to the musical part and what we witnessed right after Stathis pressed play…

1. Marching to Glory (1:18)
An epic introduction that whets the appetite of the listener. The grandiose orchestration leads to an imposing narration by Albert Bell (Forsaken, Nomad Son) who is one of the three guests featured in the album. An ideal prelude for the following track.

2. Glorious Victory (4:38)
This could be the soundtrack of Stathis’ triumph against his recent hardship that threatened his own life. An epic track reminiscent of Οδύσσεια. Power metal style with galloping fast tempo that subsides in the middle for a bass break only to burst into a dazzling solo.

3. The Iron Tower (4:24)
The first contact with the material of the new album was through the lyric video of this song a few months back. An ominous story inspired by the Middle Ages and the holy inquisition transferred ideally into music through this slow epic doom track, bearing the mark of the classic and unmistakable Reflection sound. It is worth mentioning that this was the track through which George Thomaides, the band’s new voice, introduced himself and showcased how well he could match with the band’s style.

4. Fallen Shadow (5:02)
Things become even darker in this song that speaks about a demon trapped in Earth, witnessing all the great moments in the history of Mankind. Mid to fast tempo with the keyboards carrying the leading role in building a dark atmosphere pointing towards When Shadows Fall.

5. Takla Makan (4:43)
The second guest is no other that the great Mats Leven (Candlemass, Malmsteen, Abstract Algebra etc.). The group wrote this song having his voice in mind. So imagine the satisfaction when he agreed to sing on it not because he was being polite but due to his genuine interest for the composition itself. Without a doubt the Doom Metal moment of the album, epic, slow and dark while Leven delivers flawlessly, proving to be a perfect match singing about the Great White Pyramid of the Serpents.

6. Time Traveler (4:57)
Perhaps the most Power metal moment of the album, this science fiction story that unfolds in space brings fellow band Innerwish to mind. Fast and uplifting tempo ideal for the band’s upcoming live concerts.

7. Stormbringer (3:44)
From Power metal we shift to Epic Metal inspired by Manowar, a big and obvious influence of the band. Kostas Tokas (Power Crue, Reload) is the third guest delivering the vocals of the intro in a melodic and high pitched way, creating a fine antithesis when George steps in with his raspy voice and while the music is gradually toning upwards leading to a galloping theme which matches the lyrics about Elric’s mighty sword.

8. Ruler of My Own Land (4:59)
This is the first part of a two part story dedicated to the Pontian Genocide. A power metal song that could have easily been a part of Y.J. Malmsteen’s finest moments. An anthemic chorus crowned by fantastic guitar work, definitely concert material. The oriental elements are obvious and the song proves to be highly addictive, even after only a single spin.

9. Bleed Babylon Bleed (6:01)
Stathis’ emotional strain while introducing this track to us was more than obvious. The lyrics are actually stories and memories as transferred by his violently uprooted Pontian grandmother. For the second time in its entire history the band utilizes the traditional Pontian lyre played by Stathis himself but it’s the single one that it is used as a lead instrument. The result is bone chilling to say the least. The epic and slow tempo is enhanced with elements of Pontian music, giving an impressive closure to the album.

As a whole we are dealing with an album balancing between Οδύσσεια and When Shadows Fall, combining the epic power of the former with the dark doom metal of the latter. The result of course is 100% Reflection. The sound is fresh and completely natural, without the use of any effects. The duration is ideal since we are looking to a total of 40 minutes and the flow is utterly refreshing and entertaining. I am looking forward to the release of the album (probably in April) and the consecutive spins that will help me unlock its treasures in their entirety. 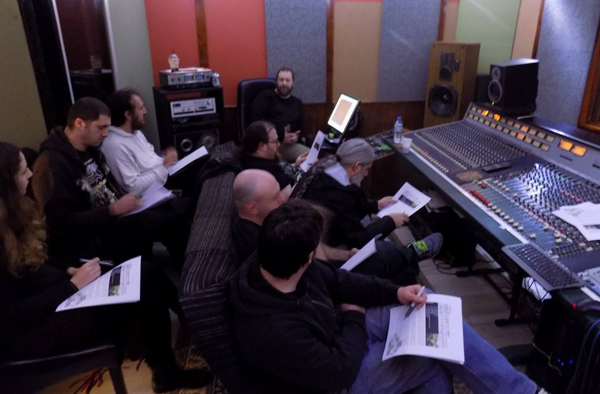