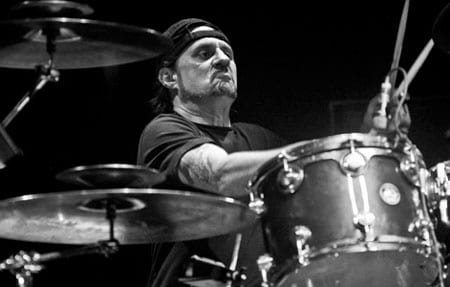 Dave Lombardo announced that he is a member of a brand new band with Retox’s Justin Pearson and Mike Crain and Locust’s Gabe Serbian. The idea was inspired by producer Ross Robinson and although they haven’t recorded anything at the moment, inspiration is overflowing. “It’s just straightforward brutal punk – metal-esque, but it’s definitely not metal” said Lombardo to Noisey. “I think it definitely leans more towards the punk style, because I feel that the way things are in the world, a punk attitude is definitely necessary to help you along with the shit that’s going on. There’s no time to sing We Are the World or all of this bullshit. We’re all pissed right now, and there’s no better way to release anger than to be in a punk band and write punk music. (…) I don’t know when we’ll be able to release anything, but I’d love to get something out by the end of the year – two singles just to release something, and then do a full-length next year. In the meantime Lombardo’s other project Philm have pulled two planned shows at The Roxy Theatre, Los Angeles on December 2 and The Glass House Concert Hall, Pomona the following night. Dead Cross will now appear instead with support from Descartes A Kant.
Despite some recent reports saying Philm had split, their label UDR told TeamRock the band are still going. “Dave has always participated in a lot of projects,” they add.