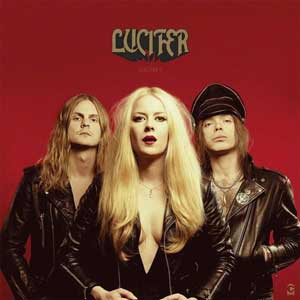 I have to admit Johanna Sadonis is tough. She has guts. She created The Oath and shortly after the occult rock debut of 2014, the group to the surprise of its friends dissolves. The impressive German, regrouped her forces and with the help of the Gaz Jennings (ex-Cathedral) creates Lucifer and “I” of 2016 introduces us to a new good doom band. Doom, 70’s, leather, occult themed, female vocals, what else is there to ask for? Yet Johanna will have to start all over after Jennings’s retirement to keep the name Lucifer alive. This time the great Nicke Andersson (Hellacopters, Entombed), her new partner, proves to be an ideal co-creator. “Lucifer II” is less doomy, more rock and close to the sound of Blue Oyster Cult. No problem, its all rock ‘n’ roll. The tracks are well-groomed, fresh, with impressive riffs and Johanna’s vocals remaining a stable value. The album was recorded by Nicke Andersson (drums, guitar, bass), Robin Tidebrink (guitar) and of course the charming natural leader of Lucifer, Johanna Sadonis on vocals.

A perfect introduction with “Electric Son”, 70’s heavy rock, Purple / Heep influenced (and Gentleman’s Pistols coming to mind). “Dreamer,” is a more progressive song, a ballad like Priest  of the 70’s, I think it’s an ideal concert song just before the encore. “Phoenix” is set in the style of The Devils Blood (especially the vocal lines) with a very fitting oriental part. “Dancing with Mr. D “is really a dancer and is a cover of  the Rolling Stones original track. “Reaper on your Heels” is like it came from “Vol. 4 while “Eyes in the sky” with the first clear doom riff, includes once again couplet  and vocal lines more calm than the central theme.
Moving towards the end, “Before the sun” is a blues rock moment close to Blues Pills, a really beautiful piece. The album closes with two epics, “Aton” and “Phaux Pharaoh”, defining the new-born Lucifer. Perfect combination of doom, lyricism and hard rock of the 70’s, with a BOC aura all around.

With the addition of members (Alexander Mayr – bass, Martin Nordin – guitar, Linus Björklund guitar), and such qualitative compositions, Lucifer seems like a band ready to conquer the world and Ι wish it with all my heart. In any case, “Lucifer II” will be very high in the 2018 list.