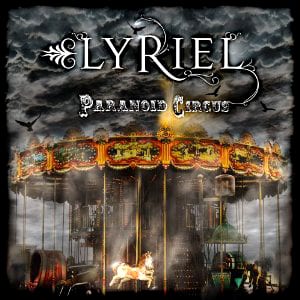 German band Lyriel is closer to Folk than to Gothic, however such a piece of info is probably unimportant. What makes the difference is the melodies and the structure. These two elements do count when it comes to the band’s course and the feedback, concerning the fans. “Paranoid Circus” was initially released in early 2010, yet the band has recently inked the deal with AFM Records and the idea of a re-release was bound to hit the table. And due to the fact that Germans are Germans and they don’t kid around when it gets down to business, they made things happen and arranged the whole thing accordingly and properly. The album came out featuring a brand new cover, two bonus tracks and a new booklet!
The Lyriel mobile is moving inside melodic paths, additionally escorted by a cello and a violin, portraying lyrics in English and narrations in Deutsch. Beautiful female vocals, totally sweet and lovable. Back vox almost like a choir, filled with lyrical passages. The voice is clean, without operating extravaganzas, yet full of power and passion.
I would love to see them live in the shadow of the holy rock of the Acropolis, with the necessary scenery in the back. It’s clear to me that these fellas have just arrived from Lothlorien! Music is heavenly and the way the songs are being performed is superb; the cello along with the violin they give the music a big father-like hug. It’s almost cinematographic!