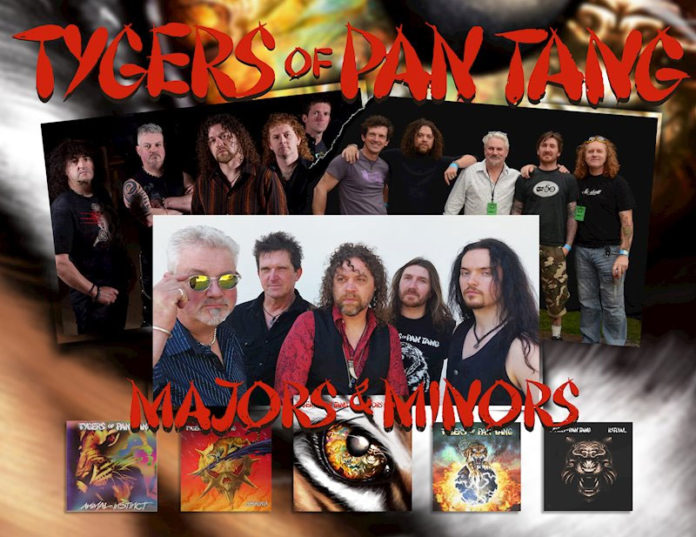 PRESS RELEASE: On May 28th 2021 Tygers of Pan Tang will release worldwide their album “Majors & Minors” which continues the band’s legacy with a fine selection of songs that were written and recorded over the last 13 years. Not just a “Best of” compilation because the band wanted to offer something special to both loyal fans, collectors and those who have missed our latest records. “It’s like your best Tygers tracks, but all in one place!“- Robb Weir. And once again the stunning artwork will make the products and merchandise associated with the album things of beauty to behold.

The band chose songs on the album which they believed to be classics and to represent the Renaissance of the Tygers boosted by having a Florentine on vocals! Partially written on the road, the tracks not only have killer riffs, balls and power pushing performances to the limit, but express the band’s creativity and musical chemistry for songwriting. Not afraid to even add Spanish Guitars and castanets if a track demands it this band are never boring! Party songs, heavy songs, rock anthems, groovy rock’n’rollers, catchy songs cleverly constructed with accessible melodies, the band has packed all of this in to this meaty package. The contribution of Chris Tsangarides able to pull the best out of the band was instrumental. The band feel that this “new” period of the band which has in fact lasted longer than the original line up has produced songs which are indispensable to the history of the band. “It’s been a lot of fun putting this together, so get yourself comfy, press play and let the Tygers do the rockin.” -Robb Weir

The CD version of the compilation includes “Plug Me In”, never released on CD, a new orchestral version of “Spoils of War”, “What You Say” never released in an album format before. Furthermore, a live version of “Keeping Me Alive”, recorded in 2018, will grace the vinyl format of “Majors & Minors”.

Known for their incendiary hit version of “Love Potion no. 9”  from “The Cage” album in 1982 which sold over 200,000 copies and gave the band two top 50 songs in the UK, Tygers remain a much loved hard rock band with their NWOBHM legacy and many loyal fans.

“When I joined the Tygers back in 2004, I didn’t know what to expect. I was so over the moon to have joined one of my favorite bands from NWOBHM, that I had no further expectations. Now in 2021, I’m going to celebrate my 17 years in the band with this compilation that covers the four albums I have recorded with them. I’m the long-lasting singer of Tygers. I’ve recorded an album with Chris Tsangarides and another one with Fred Purser, I’ve played so many gigs and traveled all round the world, enjoyed every minute on stage and backstage with so many talented musicians, playing the music I love since I was a kid. It seems a lot for a guy who had no expectations, don’t you think?” – Jack Meille

The band has a tour planned in for early 2022 and is hoping to widen and include more dates worldwide as circumstances permit.

“Majors & Minors” will be released in digital, LP and CD formats by Mighty Music on May 28th 2021. “Tygers music is full of big notes and little notes, so let’s start with a Major one and finish with on a Minor!” – Robb Weir

Vinyl tracklist:
Side A:
Only The Brave
White Lines
Destiny
Damn You!
Keeping We Alive

Side B:
Hot Blooded
What You Say
Plug Me In
Spoils Of War (Orchestral mix)
Keeping Me Alive (Live in Fismes 2016) – exclusive for vinyl