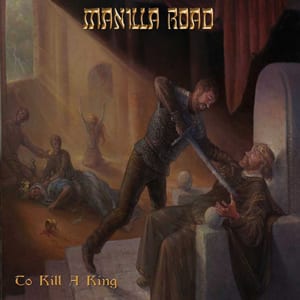 My first contact with the Manilla Road mythos was during the brief period of the disbanding. It didn’t take long before they became one of my favorite bands and for years I anticipated their return with a new studio album. When Atlantis Rising finally came out in 2001, my high expectations were not met. It was a good album that couldn’t stand in comparison with the golden era of the band. Since then, Manilla Road remained active with many concert appearances and studio albums. Albums that couldn’t exceed the “Good” mark. Magic moments were always present and will always be in every release. The bone chilling voice of Mark Shelton and his trademark guitar parts will forever move the fans. And that is the case with To Kill a King too. Shelton’s voice, even in this worn out state, is awe inspiring while in every song the lead guitar parts remind us of the band’s glory days. That is where the album peaks stop. To Kill a King lacks peaks. The compositions sound passionless and the overall sound is weak. The songs come alive only when the aforementioned guitar parts come at play. Shelton and Patrick share the vocal duties but I find this unnecessary. I fully comprehend the importance of Patrick’s role in the Manilla Road concerts since Shelton cannot pull through but when it comes to studio time, I think he can handle himself and should be the sole singer. Neudi is trying to fill the songs in a similar way to the unbeatable Randy Foxe and I have to say that he is very convincing while the bass guitar follows the Out of the Abyss recipe which fits the songs perfectly. If all these elements were better coordinated in the album mix, then the result would have been much better for sure.

This is not the best album of the band’s second era and surely not the worst. The Arena, The Talisman and Blood Island (coincidentally the fastest songs of the album) are songs that stand out and deserve a place in a Manilla Road best of that covers the last 15 years of the band’s career.