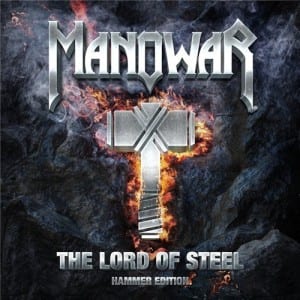 5 years without a full length Manowar album were just too many for every single die hard fan of the band. I am sure that by now the vast majority of the metal fans have already listened to “The Lord of Steel” and as it happens with the each Manowar release, there is an intense split of opinions. All in all, “The lord of Steel” is an album that you either love or hate…as it is the case, after all, with Manowar, right?
Personally, I belong to the ones that absolutely adore the band and what has achieved over the years. I really enjoyed the fact that the album is pure, raw, in your face heavy metal. I really enjoyed the fact that they let aside all the symphonic elements of “Gods of War”. I really enjoyed that the lyrics are once again are forwarded exclusively to their hardcore fans.
Did I want a more epic atmosphere…? Yes! Would I enjoy a clearer production (although, I haven’t gotten my Hammer fan Pack yet)…? Yes! Would I live without the song “Manowarriors”…? Musically speaking, absolutely yes!
But I am more than satisfied that after 30 years, Manowar still delivers the goods and writes such songs as the title track, “Born In A Grave” and “Righteous Glory” that may not be as stellar as the 80s classic tracks but that was then and this is now. The most important thing is that “The Lord of Steel” is a definite Manowar record! In a way it is the sister record to “Louder Than Hell” and all the Manowarriors around the world will embrace it. As for the rest, well…we simply don’t care! Hail!
Sakis Nikas

Brothers and sisters of metal I’m making a great effort to remain objective because subjectively “The Lord Of Steel” kicks ass just like every other Manowar record.

The first listening experience made me feel a bit awkward. After an endless listening session I can tell I liked the album a lot even though there are things in it that that I can’t understand. To begin with, where are those full of passion exciting choruses? Why is Eric Adams not singing with his trademark higher pitched notes? Why should the production be so weak? Am I the only person who pretends that “Manowarriors” and “Hail, Kill And Die” do not exist and have NEVER been written by the almighty Manowar?
Still the unique elements of this band, which always make me feel strong as steel and rebellious like a fifteen year old child, prevail here. The macho attitude, the epic melodies from the battle, the amazing performance, the strong riffs, the simple “in your face” lyrics, Joey’s nice madness, “El Gringo”, “Born In A Grave”, “Touch The Sky” and “Annihilation” make “Lord Of Steel” a significant album.
Foteini Paschalidou