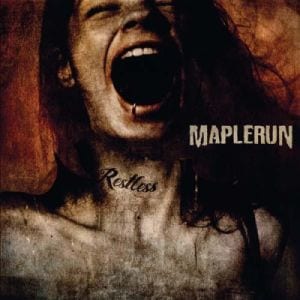 Maplerun is a band that has made all the right choices in their musical career so far. They formed in 2007 and worked on releasing their first album called “House on Fire”. Then when the opportunity presented itself they grabbed it by the hair. They had the chance and the privilege to tour Europe with the great Shadow Gallery. After the tour they released a DVD and then started working on their second album. Having completed their national service, they are back to devote themselves to the band.
The first news for the album is in the same good direction. Ted Jensen was behind the mastering (Metallica, Linkin Park) who has been busy this year in Greece also working for September Code’s  “Remembering Mirrors”. The really nice cover art was crerated by Travis Smith who has also made covers for bands like Opeth and Nevermore.
The sound of their second album is pretty similar to the first, but the band sounds more focused, more mature and with better quality production wise. They created nice melodies, clever riffs and rhythms and they managed to keep the attention.
More specifically, the album starts with a nice slow guitar riff and the drums give the impression that the album will have a slow start. But after a few seconds the guitar quickens the pace and Jo sweeps in with his drumming. It is changes in tempo like this that make the album interesting.
So there is a little bit of everything in “Restless”. Some metal songs like “Nail”, some more balladry like “The Rain” and even the radio friendly (and my personal favorite)  “Screamout”. The only thing that bugs me is Nick’s vocals. He sounds a bit nasal for my taste and his pronunciation is not the best either. Nonetheless this doesn’t take anything away from a really great record.
Maplerun continue to walk in really good ground. A second solid album that can help them expand their audience. If you have the chance to see them in a live concert don’t miss them. They great energy that exists in the album is transferred to the stage and you will certainly have a great night.