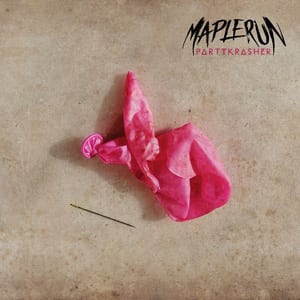 Finally, it’s here! After a very good debut album (“House On Fire”, 2008) and an excellent second strike (“Restless”, 2012), Maplerun continue to work hard and release an amazing new work, their most ambitious to date. The collaboration with David Bottrill is the proof. The American music producer has won three Grammys and has worked with bands like Tool, Muse, Godsmack and The Smashing Pumpkins among others, so you can understand the ambitions of the band and their desire to present the best possible result. Of course, he is not the type of producer who will work with anyone just for the money. Also, Bottrill came to Greece and stayed with the band until the end of the recording sessions. Finally, the mixing took place in NY by Justin Shturtz (Slipknot, Shinedown, Jag Panzer). A highly professional work overall.

Besides that, “Partykrasher” is an album that gets your attention from the beginning until the end with its compositions and energy. The band from Athens is mostly influenced from the alternative rock/metal sound of USA and in their music you will find many great bands of the scene. But they have filtered all their influences so that it doesn’t seems that they are ripping off someone while there is very clear how much they have grown as composers and musicians as the final result is the most impressive that they have presented us so far. Of course, Bottrill has played an important part in this job. His production is f-l-a-w-l-e-s-s and he has taken credits for music and lyrics of the album. It’s not a secret that an experienced producer can help a band with many ways if they let him do his job. “D.I.Y.”, “Keep On Staring”, “Wasted” and “Give It To You” are some perfect examples.

Maplerun take huge steps ahead and show us that if they continue working like that, a bright future awaits them. Soon they will start touring, so if you have the chance don’t miss them. They are one of the best Greek live acts that anyone can see.

For The Fans Of: Godsmack, Deftones, 90’s Metallica