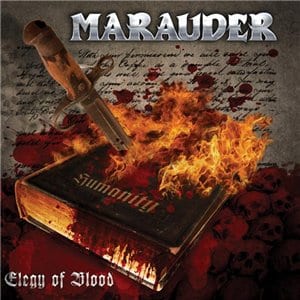 Marauder is not a rookie band…it’s almost unbelievable but they are already counting more than 20 years of career with remarkable albums that definitely honor our country. “Elegy of Blood” is the band’s 5th album and I have to say that it doesn’t present any differentiation compared to Marauder’s previous releases (and why should they do that, after all…?). Traditional heavy metal infused with power/epic elements and once again a central theme; this time a little bit wider and general: the great wars and battles.
Now, in regards with the pure musical aspect –and due to the fact that I was always strict and demanding with Marauder because I know of what they are capable of- I didn’t get what I full expected. I am not saying that there aren’t in there some inspired moments like for instance “Roman Empire” or “Alexander”. But the majority of the songs are simply OK and I know that they could be even better. The guitar work by Andreas Tsaousis and George Sofronas is excellent and as a matter of fact remains the absolute highlight of the record while there could have been done a far better job in the capturing/recording of the vocals. I am sure that any Greek band would kill to have a record like this…but, Marauder is not any ordinary band.
Highlight: There is a bonus track on the c.d. entitled “In Memory”.