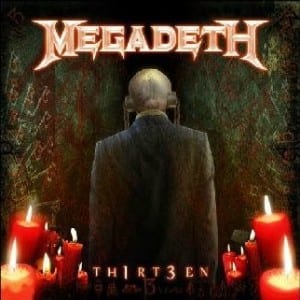 After the most impressive “Endgame” that blew us away with its undeniable quality and storming guitar riffing, Dave Mustaine returns –almost in a quickened pace from the ultra successful Big Four Shows and his reconciliation with Metallica- having beside you once again founding member Dave Ellefson who adds an extra positive element to the overall status of Megadeth. Broderick and Drover complete arguably the best Megadeth line-up since the classic Mustaine/Ellefson/Menza/Friedman incarnation of the US thrashers.
“Th1rt3en” is…you guessed it…the thirteenth Megadeth opus and coincidentally is being released around the same period as “Lulu” (no comparison whatsoever). Truth must be told here: “Endgame” had risen the bar high for Megadeth and the new album might not reach its predecessor’s level but it’s nevertheless respectable, qualitative but at the same time uneven and diverse. At points, you’re under the impression that it was written under pressure (maybe, from Roadrunner’s side?) and the fact that it includes some older tunes (b’ sides, tracks from video-games etc.) empowers our point of view.
However, “Th1rt3en” does not disappoint and can be characterized as a really good effort by Mustaine and Co. Actually, there are moments in there that maybe will bring you in mind the atmosphere of “Youthanasia” and “United Abominations”.
Highlight: The title track could easily be the companion to Mustaine’s recent autobiography.