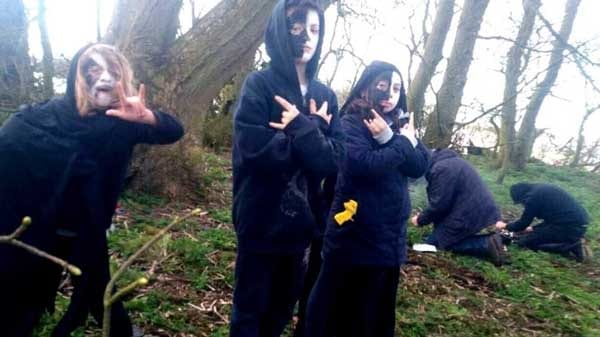 A group of seven Scottish metal fans were ‘rescued’ by the emergency services after being mistaken for members of a ‘suicide cult’. The group was on a camping trip on Reed Bower Island in Loch Leven, Perthshire, when a passer-by called the police to say that they were involved in a suicide pact. According to reports, the police smashed the windows of the group’s two cars in a search for a possible suicide note, before making their way to the island in boats to ‘rescue’ the campers. “We were sitting around the fire telling ghost stories and that’s when we started seeing loads of weird lights in the sky and across the water and then there were more and more of them,” David Henderson, one of the group, told the BBC. “”The lights seemed to come towards us and the dog started barking – it was very surreal and we really didn’t know what it was. It was like something out of a movie, like some kind of an X-Files episode.”

Henderson, a teacher in Glasgow and singer in the “dark folk” band Nyctopia, was camping with friends Panagiotis Filis and Ross Anderson, three children and a dog. Filis is a founder of the Black Metal Brewery, who “provide real drinks of uncompromised quality for the fans of true metal, folk, ancient history – and beyond.”

“We killed the fire because we didn’t know who this was and our priority was to protect the kids,” said Henderson. “When they came closer we realised it was a rescue team and I could hear on their radios that they wanted us off the island.”
When they returned to the mainland, they were greeted by around 20 emergency service vehicles and 50 onlookers. The adults were told that the authorities were concerned about a “potential kidnapping”, and were questioned by police before being released.

“It was a total over-reaction,” said Henderson. “Because we were all dressed in black and look like heavy metal fans, people sometimes assume we are dangerous. We are just a group of friends who like to go wild camping, drink beer and listen to heavy metal music.”

A spokeswoman for Police Scotland said: “We were called regarding a concern for a group of people on Sunday at around 19.00. Inquiries were carried out, along with the Scottish Fire and Rescue Service and they were all traced safe and well at around midnight.”
Source: Metal Hammer UK