Since the festival season in Greece this year isn’t exactly to my taste, a trip in order to see Metallica’s ‘By Request’ tour was necessary. After Italy in 2011 and Switzerland in 2012 it was time to visit Czech Republic, for a concert that took place in a swimming pool, as Hetfield accurately put it, but that only made it even more magical.

Kvelertak were a (small) disappointment. At last year’s ‘Heavy by the Sea’ festival I quite enjoyed them, but this time the sound was bad and Metallica’s huge stage seemed to be too much to handle.

Children of Bodom and shredder Alexi Laiho on the other hand received a more enthusiastic response. They played a solid 50 minutes, although I would have preferred not having to hear an intro tape before each song on such a short festival set.

The almighty Alice in Chains had the direct support slot. A few months ago in Manchester they were simply phenomenal, but this time the crowd was indifferent and there was no vibe. Also by then the rain had started to fall on the fans and the band as well. Not that we didn’t enjoy their amazing songs, ‘We Die Young’, ‘Rooster’, ‘Again’, ‘Last of My Kind’, ‘Hollow’ and the list goes on, it’s just that the comparison with their headline show makes this performance feel ‘only ok’. 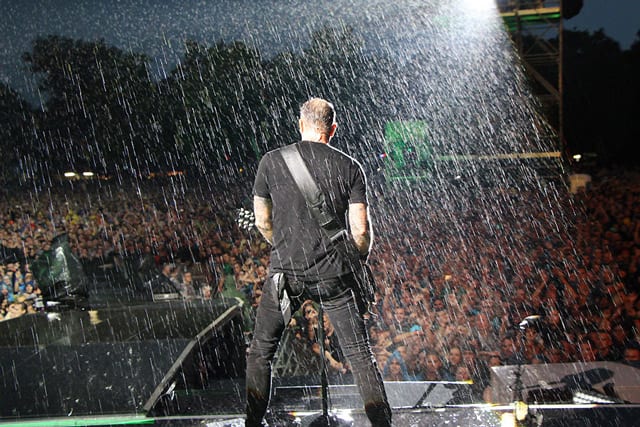 The next band though, is never ‘just ok’. Those of you that were there for their last show in Greece in 2010 witnessed firsthand how well rain suits them. This time though it was a true storm, coming down so hard that at times you could barely see the band! But because we’re talking about Metallica, it goes without saying that the sound, the performance and the laser/screen show (no pyro this year) were all phenomenal.

Fans choosing the setlist during this tour didn’t prove as challenging for the group as we would have hoped, some exceptions aside (and the world premiere of ‘The Frayed Ends of Sanity’ in Helsinki let’s not forget). Anyways, ‘Battery’, ‘Master of Puppets’, ‘Sanitarium’ and ‘Fuel’ are not a bad way to open a show wouldn’t you say? Also, big thanks to Kirk Hammett for coming right in front of me to play ‘The Unforgiven’ solo, not missing a note although his guitar was dripping wet.

New track ‘Lords of Summer’ is still a work in progress but live it holds its ground quite well, ‘…And Justice for All’ is always a highlight and words fail to describe ‘Orion’. In the encore we heard the uplifting surprise of the tour, ‘Whiskey in the Jar’, and the only question left was which would be the ‘Vote of the day’ song. It wasn’t the lovely ‘The Day that Never Comes’ or ‘The Unforgiven II’ that would have been historical, no, it was the title track from that… bad album that Metallica released in 2003. 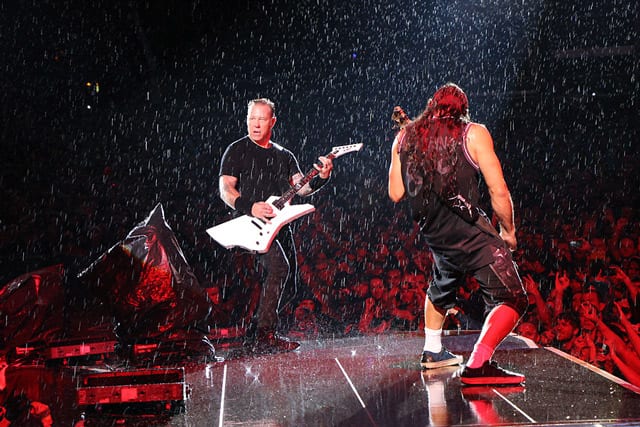 We got a roaring performance of ‘St. Anger’, and the crowd loved it. It would have been a ‘response’, only if Metallica needed to do that. They don’t.

Immortal closer ‘Seek and Destroy’ closed this unforgettable, ‘underwater’ gig from this one of a kind band. If they could release a new album before 2069, I would greatly appreciate it.

Setlist: Battery, Master of Puppets, Welcome Home (Sanitarium), Fuel, The Unforgiven, Lords of Summer, …And Justice for All, Sad but True, Fade to Black, Orion, One, For Whom the Bell Tolls, Creeping Death, Nothing Else Matters, Enter Sandman

Encore: Whiskey in the Jar, St. Anger, Seek and Destroy 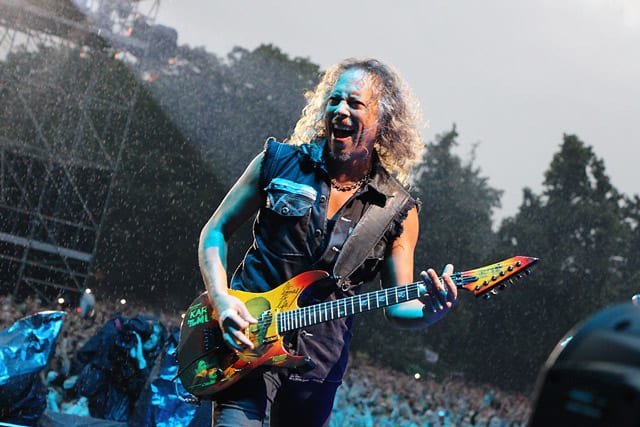