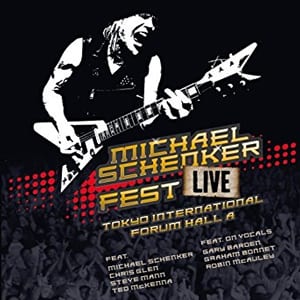 Mr. Michael Schenker needs no introduction. With huge discography, contributions in bands like the Scorpions and UFO and a particularly rich solo career and multiple collaborations, we’re talking about the ultimate guitar hero. This show took place in Japan during the 2016 and it is described  as “not another” one of the many live albums which have been released by Schenker, but something truly historic.

The lineup includes all the MSG singers of the 80s (Barden, Bonnet and McAuley) and also faeturing the “Assault Attack” rhythm section (Glen, McKenna). As far as the band’s performance is concerned it really sounds not a single day has passed since its heyday. The concert starts with Barden era tracks, followed by Bonnet’s and finally McAuley’s. All the band and singers are at their best, especially Michael Schenker, while the sound is crystal clear. The stand out tracks of this album are “Cry For The Nations”, “Captain Nemo” and especially the songs performed by McAuley. Of course, once again we should note how lucky Japanese fans are for enjoying shows like this one. I am expecting the Blu-ray version of the festival to have the visual side of the project.